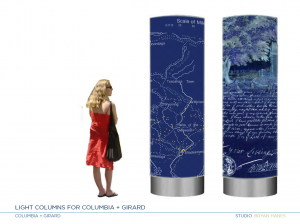 To help punctuate the connection between the Big Green Block (location of Kensington CAPA High School at Front and Palmer) and Penn Treaty Park, New Kensington CDC is installing 2 historiographic light towers, on the southeast and northwest corners of Girard and Columbia. The towers, designed by landscape architect Bryan Hanes–who produced the master plan for Penn Treaty–will be installed by year’s end. The project was funded in part by the Preservation Alliance of Greater Philadelphia’s Vital Neighborhoods Initiative, the Delaware Valley Regional Planning Commission, and the city’s Commerce Department.

Interesting to note that community leaders had sought to install pedestrian lighting along Girard and Frankford Avenues as part of ongoing streetscape improvements, but were turned down by the Streets Department, which refuses to maintain them. Stuck with “brown round” highway lighting (the contemporary version of the cobra lamp), NKCDC did an end run by commissioning “art” to improve the pedestrian experience at this important intersection.