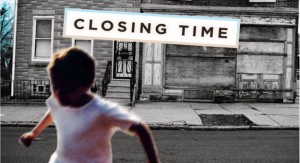 Embittered East Falls native Joe Queenan, who writes occasionally for London’s Guardian, has it in for the film Contagion, and not only because of the implausible plot. What rubs Joe so wrong? The grammatical misuse of scene location names:

Lately, I have noticed the comma between the city and country or city and state has been dropped. Thus, in Contagion, the action is identified as taking place in “Minneapolis Minnesota” or “Chicago Illinois” or “Geneva Switzerland”. That looks a bit stupid, suggesting the graphics person has either not yet finished school, or never seen a high-class movie. But even more worrying is how confusing all this might be to callow, impressionable youths. Children growing up in rural Florida could easily get the idea that “Geneva Switzerland” is the name of one of the characters in the film and not the name of a famous European city. The same goes for “Paris France” and “Florence Italy” and even “London England.” Paris and Florence are first names for girls, and London is the name of a character in The Suite Life of Zack and Cody.

But, to Queenan, Contagion’s bigger sin is the blurring of lines between “city” and “metropolitan region.”

Early in the film, right after Gwyneth Paltrow develops a nasty cough that will ultimately wipe out 3.5m people, a graphic superimposed on the screen apprises us that “Minneapolis Minnesota” has a population of 3.3m. No, it doesn’t. According to the latest US census, the population of Minneapolis is a paltry 382,578. What the moviemakers are apparently referring to is the total metropolitan area of the city. Which would be fine, if they applied the same standard throughout the film.

This is, of course, a vexing issue for all of us who wish to compare cities. How many people live in Istanbul or Tokyo or Barcelona? Do suburbs count? Are there 6 million in Philadelphia or 1.5?

Is a city a political entity, a physical place, or a state of mind?