If All The World Were A City… 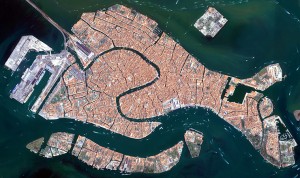 In so many ways in the urban world, density is destiny.

When, in 1930, one-third of Americans lived in the largest 10 cities in the nation, those cities were crowded places. Today, some 8 percent of us live in the top ten cities, and they are, on the whole, far less dense (think 1930 Pittsburgh versus 2010 San Jose).

There are far-reaching political and cultural effects of this broad de-densification and decentralization, including that it is generally very difficult to amass broad political protest, for protest needs place to become powerful.

I like to compare cities–when I am in one, I am thinking of another, and when I am in that one I am thinking of a third. Yet urban comparisons are slippery because its hard to really grasp scale, and particularly, density. But density itself is hard to figure; high density certainly doesn’t produce uniformly good urban form. 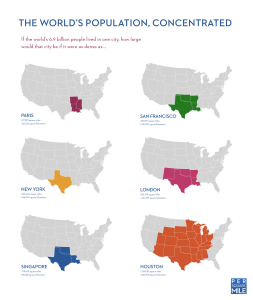 This week, I came across a couple of visual indicators of urban density. The first was created by the California urbanist Tim De Chant, creator of the city-observing blog Per Square Mile. To graphically illustrate comparative urban density, De Chant shows how much land all the people in the world would occupy if they lived in New York, Paris, San Francisco, London, Houston, and Singapore. He uses a map of the US as a basis, so that if all the world lived at New York’s density they would fit into Texas, at Singapore’s density Texas, Oklahoma, and Louisiana, at Paris’ Louisiana, Arkansas, and Mississippi.

There’s another new view on density, at least for a few of the world’s cities. In a gallery of Nasa and European Space Agency photos, there is a wonderful shot of Venice (#7 and above), the dense cluster of cities in northern Pakistan and India (#2), and New York (#12), so thickly built from afar it appears to be a glacier.