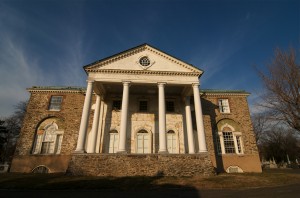 History Making Productions, the documentary film house owned by Sam and Phil Katz and the producer of “Philadelphia: The Great Experiment” (and my employer), will renovate the facade of the Hamilton mansion at the Woodlands in the coming weeks. HMP will shoot scenes from the series’ second episode, “Yellow Fever and the Rebirth of the City,” at the Woodlands this November. The film will air on 6ABC this coming March.