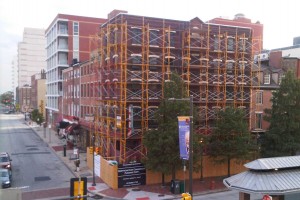 A restaurant seems likely at the long vacant 1883 Franklin Trust Company building at Front and Market, originally the site of the London Coffee House.

This past August, the city’s Zoning Board gave restaurateur Aaron Kavulich the go-ahead to develop a restaurant there. Kavulich needed a variance to allow use of the basement and first two floors for operations, with private dining and an office on the third floor and an apartment on the fourth. Its style will be new American, with a focus on local and sustainable ingredients. Kavulich won the backing and approval of the Old City Civic Association and plans to open in November.

This will make the restaurant’s opening about 310 years after the founding of the London Coffee House. Then, the 100-foot-wide avenue known as Market Street was called High Street, a term derived from one or both of the following: 1) “High” was the familiar name of the main street in most English towns, a custom dating back to Roman times; and 2) the street began at the highest point of the bluff that ran alongside the Delaware River when Philadelphia was founded. 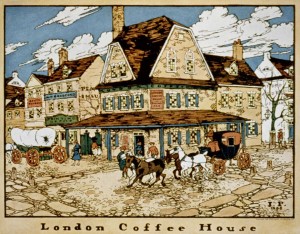 Front and High was indeed Philadelphia’s first town center and the coffee house a convenient stop for stagecoaches arriving from points north and south and travelers disembarking at the port. The London Coffee House became a popular place for merchant dealing and a political hangout.

The “Widow Roberts” ran the tavern for years, serving coffee, alcoholic beverages and simple meals. When she retired in 1754, printer/publisher William Bradford took over and turned it into the first stock exchange in America where owners of recently arrived schooners advertised their goods, investors bought and sold real estate, fishermen boasted about their latest catch, printers gathered the news, and public auctioneers sold a variety of merchandise—as well as slaves. Revolutionary War pamphleteer Thomas Paine, boarding next door, was offended by the view of slave auctions from his window. 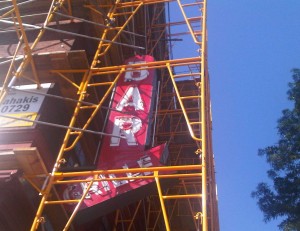 Bar Grill sign in front of the building on southwest corner of Front and Market Streets.

Philadelphia’s businessmen formally established the Philadelphia Stock Exchange at the London Coffee House in 1790, preceding the New York Stock Exchange by two years. But seeing the need for more substantial accommodations, they soon moved to City Tavern (aka Merchants’ Coffee House) a few blocks away.

The London Coffee House became a general store in 1791 and then a tobacco shop and cigar manufactory. The building gave way in 1883 to the handsome five-story edifice that now stands at 100 Market Street. This was later home to the four-story Franklin Trust Company around 1900; the firm’s main office was on the southwest corner of 15th and Chestnut Streets. A small sign posted in front noted that site’s distinct colonial heritage. 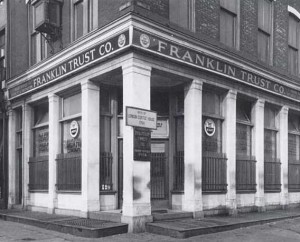 The Franklin Trust Company, from Philadelphia Then and Now: 60 Sites Photographed in the Past and Present (1988), by Kenneth Finkel, at 12.

The Franklin Trust Company operated there for a number of years, but as the neighborhood declined in the 20th century, so did the firm’s business. The building later became a bar and grill, yet that establishment soon failed, and the place has been vacant for some thirty years.

No word on whether the new restaurant will retain the famous Bar Grill sign. More critically, can it reignite this long-floundering corner?