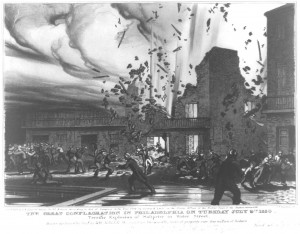 “The Great Conflagration in Philadelphia on Tuesday, July 9th, 1850.” Library of Congress.

The first great fire in Philadelphia’s history began in the afternoon of July 9, 1850, at a warehouse on the east side of Water Street between Vine and Race Streets, near the Vine Street Wharf on the Delaware River.

The five-story structure was reportedly located at what is now approximately 237 North Water Street, immediately north of the Ben Franklin Bridge’s Philadelphia anchorage. As the fire happened before the 1854 Consolidation of Philadelphia, the congested commercial/dockside area was partly outside the Philadelphia’s original city limits at Vine Street. About half of the zone of devastation was thus in Northern Liberties.

The fire began when pressed hay stored in an upper floor of the warehouse somehow combusted. This itself did not cause much alarm, but several violent explosions of saltpeter—stored in the warehouse’s basement—spread the fire. Burning hay and flaming embers from the destroyed building flew in all directions; the wind carried bits of smoldering sulfur (stored at an adjoining building) all the way to Broad Street.

Very quickly, the resulting inferno extended southward to Race Street, westward past Front Street to Second Street, and northward to Callowhill Street. Many people who lived within half a mile of the district packed their things and prepared for a sudden evacuation. The entire city was at risk of a devastating catastrophe that night. 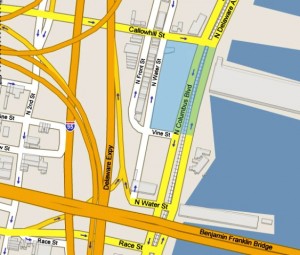 Site of the Great Conflagration of 1850 and approximate area of devastation. Google map.

News of the blaze was telegraphed across the United States and was even later reported in England. More than 100 firemen from as far away as Newark, New York, Wilmington and Baltimore arrived to relieve native firefighters who had became exhausted by the heat and their efforts. This was probably the first American disaster in which technology—telegraphs and trains—were employed. The inferno—its light seen for thirty miles around—was subdued sometime during the night.

The calamity injured about 100 people and took at least 28 lives, including some killed in the street and in adjacent buildings as a result of the first mighty explosion(accounts vary). Others were trampled in the chaos. Still others drowned in the Delaware River from the shock of the main explosion or from purposefully jumping into the river to escape the devastation. Some firemen apparently died too.

Three hundred and sixty-seven buildings were reduced to ashes in some 18 acres. About 300 of the destroyed structures were small row-homes, leaving many poor families homeless. In a fairly uncommon civic action for that era, the Philadelphia City Councils appropriated $10,000 for the relief of survivors; the Commissioners of Northern Liberties did the same. Local citizens also contributed some $31,000 for the assistance of those injured.

Almost all of Water Street as it existed in the 18th and 19th centuries has been obliterated by Interstate 95. But most of the street between Race and Callowhill Streets still remains. The block that was ground zero of the explosion and fire was rebuilt and resumed being as congested as before. Some of the smaller buildings there were later replaced by larger warehouses. The area became very rundown by the 1970s and an empty lot now occupies the entire block.