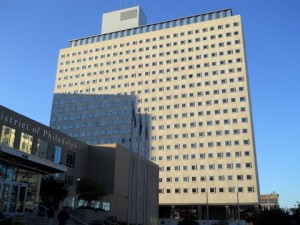 Editor’s Note: Today’s Soapbox is a guest editorial by a reader, Scoats. It’s our first one. We invite you to participate in the conversation. Pitch us your Soapbox idea. E-mail editor@hiddencityphila.org.

by Scoats
One of the city’s most unloved midrise buildings, the State Office Building (SOB!) at Broad and Spring Garden, is about to be redeveloped into an apartment building with ground level retail. This rather curious example of the International style is worth checking out in person while it still exists in its current form.

International Style’s hallmark is pure form following function. The best of course is the deservedly iconic PSFS Building at 12th and Market. But International Style, fundamentally a product of Modernism, and common from the 1930-70s, was never very popular. Too hard, too cold, too unforgiving to be well loved.

Like all those grand Victorian buildings that were lost back when International Style buildings were becoming common, it is now International’s turn to be tossed onto history’s scrapheap. We modern-day folks mourn all the lost crazed Frank Furness masterworks. Will later day people mourn for lost examples of the International style? Meh, probably not.

However, the State Office Building is worth our time. As I explain below, it fails on many levels. But it also succeeds in a few, critical, ways too. Perhaps it’s this duality that makes this building so fascinating.

Fail No. 1
Speeding by in a car, the State Office Building is ugly, even by the already low standards of International Style, a rectangular concrete box with smallish square windows on the long sides and a blank wall facing broad street. It has zero sex appeal. Bleh.

Fail No. 2
The most curious thing about this building is the rather grand plaza that surrounds it. At 300,000 sq ft, the SOB is not a huge building. For comparison, Liberty Place is 1.2 million sq ft and II Liberty Place is 1.5 million sq ft. But the unused plaza looks like it could hold thousands of people. Steps surround the building on three sides, seemingly to provide seating or risers for viewing. The plaza makes absolutely no sense in its original context, built for crowds that never were. It’s dead space at what should be an important intersection. 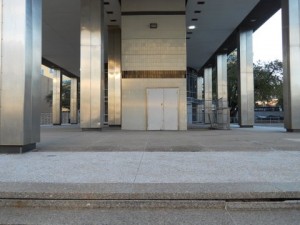 Fail No. 3
Where’s the front door? Around this time, for reasons now lost, architects got their kicks by not only to making office buildings ugly, but by also hiding the front door. Ten Penn Center, since cleverly fixed, was a particularly vexing example. Approaching from Broad Street, rather than arriving at the entrance, the SOB presents you with rusty steel service doors; the entrance is somewhere behind.

Fail No. 4
The 15th Street side has a surface parking lot behind a tall, block-long, blank wall, putting out a “this would be a wonderful place to get mugged” atmosphere. This fortress-like anti-urban mentality was typical of that era. 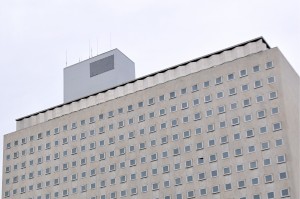 5th and Final Fail
The three story high air conditioning unit, hulking on the roof, sits off center like an afterthought. In 1958, central air conditioning was standard for office buildings and should have been integrated into the design. For years the equipment was covered with shiny reflective glass that really called attention to its big ugly self while simultaneously clashing with the dull facade (a double or maybe triple fail). The equipment, while still hulking and off center, is now at least covered with a more muted material.

One of the most beloved aspects of the PSFS Building it is the giant PSFS neon sign on its roof. Like all really good design, whether International or Victorian, form follows function. With PSFS, the function of the neon letters is to hide the air conditioning unit. The advertising was a bonus. Built 30 years after PSFS, the designers of the SOB should have done better. 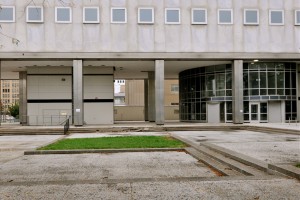 Checking it Out in Person
Even with all those fails, I have come to quite appreciate this building in the last few years. The curved glass box entrance, a somewhat recent (and huge aesthetic) improvement, really works with the existing architecture. It was when someone fixed this particular fail as best they could, that I begrudgingly began to appreciate this building.

Then I realized it was an attractive building. Not mere gray concrete, the facade is subtly rich marble. The endless square windows with their gray frames sort of pop. The shiny steel columns that support the building from the plaza are perfect.

Cleaned up, this building could be a real winner. And the time might be right for us to start appreciating it. 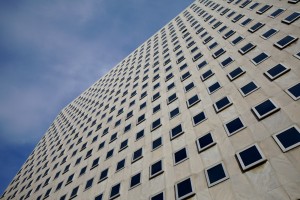 Bart Blatstein, who developed the Liberties Walk and Piazza developments in Northern Liberties, is the new owner. Liberties Walk sounded like a complete debacle when Blatstein announced it, but Bart proved everyone wrong. Not only does Liberties Walk not suck, it is a very vibrant and lively urban space. And the Piazza took it to a whole other level. It’s even actually cool.

At the SOB, besides the plaza, there is the strange surface parking lot (seriously, it’s weird, take a look at it) on the 15th Street side for him to work with. He also recently just bought the Inquirer Building down the street. Blatstein has proven that he gets what it takes to create urban energy, and it will be interesting to the transformation of both the SOB’s form and function.

A post-script, about the rush to judge: The SOB had a sort of little windowed, flat grey facade twin for a while, the former Six Penn Center at 16th and Market, which was a particularly ugly building. In the 1990s, Six Penn Center was renovated with the original facade being completely removed and replaced with conventional full glass outer walls. At this time they also ripped out the late 1950s lobby, tossing a full wall art work that nobody cared about. Months after becoming landfill, that work was discovered to be an Ellsworth Kelly piece worth millions. It was his first public commission.

Scoats is an artist, writer, and (at 5’6 literally) a small businessperson.