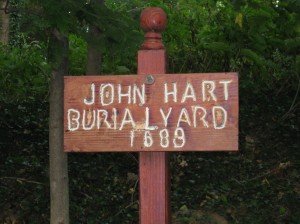 In 1812, while on his way home to Philadelphia, Benjamin Rush stopped at a small burial ground in what was then Byberry Township, just on the Philadelphia side of the Philadelphia/Bucks county border. Rush, celebrated physician and signer of the Declaration of Independence who became known as Dr. Sangrado for his heavy bleeding treatment of yellow fever, was born and spent his early years in Byberry, where his family had lived since the 1680s. Many of his ancestors were buried in the little cemetery and he was there to pay homage to them. Writing to his good friend John Adams, Rush described being overcome with emotion while standing before their graves:

On my way home I stopped to view a family graveyard in which were buried three and a part of four successive generations, all of whom were descendants of Captain John Rush [Benjamin’s great-great grandfather] who, with six sons and three daughters followed William Penn to Pennsylvania in 1683…While standing and considering the repository of the dead, there holding my kindred dust, my thoughts ran wild, and my ancestors seemed to stand before me in the homespun dresses, and to say what means this gentleman, by thus intruding upon our repose? And I seemed to say dear and venerable friends, be not disturbed.  I am one who inherits your blood and name, and come here to do homage to your Christian and moral virtues. 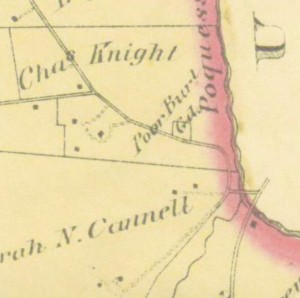 Were Rush to re-visit the site today, he would no doubt be disheartened at the state of the overgrown, wooded lot which bears no trace of ever having been a burial ground. Yet he would also be encouraged to know that a small group of volunteers is making a determined effort to clear the site and ensure that it receives some recognition.

The one-acre plot is known as Hart’s Burial Ground, after John Hart who purchased about 500 acres of land in Byberry from William Penn. Hart came to America in 1683 on the same ship as Captain John Rush and ended up marrying Rush’s daughter Susanna. Hart’s home near Poquessing Creek was the site of early Quaker meetings and he set aside a small plot of land as a burial ground for family and friends. Hart moved from the area in 1695 and in 1786 his grandson bequeathed the small cemetery to the Byberry Township Overseers of the Poor for use as a burial ground for the poor. Burials reportedly continued there until the 1840s. 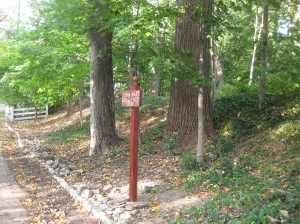 Hart Cemetery, cleaned up and with a new sign (Photo by Jack McCarthy)

When Byberry Township was eliminated in the 1854 Philadelphia City-County Consolidation, the plot apparently became the property of the City of Philadelphia. Little work seems to have been done on it over the years, leading to its current state. It is now a nondescript overgrown lot on an isolated stretch of Red Lion Road in Crestmont Farms, an enclave of stately homes on the far northern edge of the city.

In recent years members of Friends of Poquessing Creek Watershed have begun an effort to restore Hart Cemetery. They have sponsored several clean-up events and have been working with the city to see that the site is properly maintained. A few months ago they erected a modest sign at the site, giving at least some recognition to this once hallowed but now largely forgotten ground.