In June, the eclectic Llama Tooth restaurant opened at 1033 Spring Garden Street. Aside from the llama-themed décor and the mural above the patio, the building looks like an ordinary row house. However, closer inspection reveals barely-legible lettering on the tin cornice that reads “E.S. JOHNSTON PHILA. INSTITUTE.” This modest building is all that remains of one of the first speech therapy clinics in the United States. 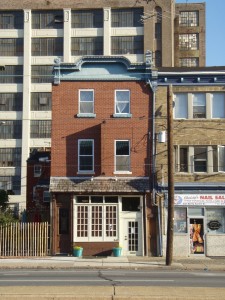 The full name of the school was “The Johnston Philadelphia Institute for the Permanent Cure of Stammering, Stuttering, and All Other Defects in Articulation.” It was founder Edwin S. Johnston’s second business at that location. His first, a wallpaper shop, does not appear to have been very successful. In addition, he suffered from a terrible stammer. This caused him great anguish, at one point driving him into a state where “duty to others only, was the motive for the continuance of existence.”

Oratory was prized during the Victorian era. Contemporary magazines were full of ads for schools to teach dramatic public speaking. As Johnston tells the story, he tried all of the available cures for stammering. At the time, these included everything from abrasive body scrubs to electrical shocks. None of them worked. He then studied the literature on stammering and invented a way to cure himself. By age 40, he could speak fluently. Finding a new joy and purpose in life, he opened the institute in 1884 to cure others as he had cured himself. 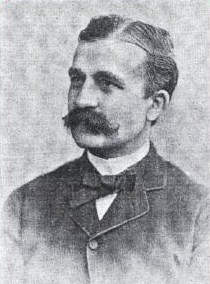 Whether any of this story is true is impossible to say. What we do know is that the institute grew steadily over the next eighteen years. It advertised in national magazines such as Harper’s Monthly and Cosmopolitan. All of the ads began with the words “Do Not Stammer,” in bold letters. It also sent out a free book about the school called “The Prospectus.” By 1902 this was an elaborate eighty-page production, its hardbound cover was embossed with the slogan, “Do Not Stammer,” wreathed in ornate scroll work.

The photographs in the 1902 Prospectus depict an opulently furnished institution. 1033 Spring Garden was Johnston’s home, housing the school offices and consulting rooms for new students. 1043 Spring Garden contained classrooms and other facilities. A third building at 517 North 11th St. housed the students during their stay, which was mandatory.

The institute insisted upon absolute control of over its pupils’ lives. They were not allowed to speak to outsiders or to each other, except in the presence of instructors. Johnston is vague about what the treatment entailed, but most of it seems to have been simple voice training, as in modern speech therapy. Exercise was another important part of the cure, with the third floor of 1043 outfitted as a gymnasium. During the summer months Johnston conducted the school in Atlantic City, N.J., at the time a famous health resort.

Johnston claimed that his method was always successful when followed precisely. This reeks of 19th century boosterism. On the other hand, his methods look very similar to those of modern speech therapists. In a field that was dominated by harsh treatments, Johnston’s method looks very progressive and sensible. We also know that a great number of former students, doctors and business leaders endorsed his method, including John Wanamaker, whom he apparently knew personally. The school appears to have closed around 1904, most likely because Johnston died without grooming a successor.

We can’t know what Johnston would have said about the llama-themed restaurant that now occupies his home. Whatever it might have been, however, it’s safe to say he would not have stammered while saying it.