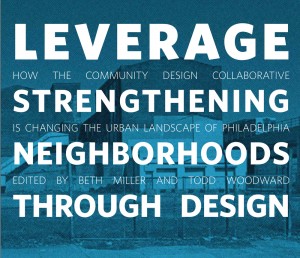 With the release of their new book, Leverage: Strengthening Communities Through Design, the Community Design Collaborative marks twenty years of connecting Philadelphia neighborhoods and community groups to vital design services. The lavishly illustrated volume offers a compelling picture of the Collaborative’s mission over the past two decades: to harness the power that architecture and design have to improve the city and bring its people together.

Since its founding in 1991, the Collaborative has offered pro bono design services to community groups willing to put in the effort, together with the Collaborative’s many architect volunteers, to improve their neighborhoods. Providing only 10% of the initial design services required for a project, the Collaborative offers just enough for communities to dig in and get started. To date, the organization has engaged Philadelphians in over 500 design projects, ranging from storefront improvements on Lancaster Avenue to new senior housing in East Poplar.

Now with Leverage, what we have is not simply a portfolio of the Collaborative’s work, but a valuable resource of concrete and realistic examples of how communities can begin fixing their neighborhoods today. Along with plans, renderings, and photographs of twenty highlighted projects, Leverage offers short essays by veteran thinkers like Mark Alan Hughes and conversations between newer design leaders, including Leverage editors, Collaborative director Beth Miller and architect Todd Woodward. The overarching focus is how collaboration in design is changing the face of our neighborhoods in an overwhelmingly positive way. 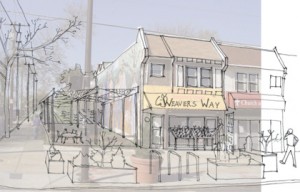 Among the featured projects in Leverage are the reinvention of a storefront for a new branch of Weavers Way co-op in West Oak Lane, a playground retrofit at the Greenfield School in Center City, and the recently completed Sheridan Street Houses in North Philadelphia. In these projects and many others, community design corporations and non-profit developers received crucial early guidance from the Collaborative, later fine-tuning the designs and moving the projects forward on their own. Envisioning design solutions as a community is not just part of the process, it is one of the goals. This level of direct community involvement in the design process, Leverage stresses, has empowered many Philadelphia residents to be more proactive about ensuring a future for their neighborhoods.

Only about 50 of the Collaborative’s 500 total projects have actually been built. That might seem like a small number, but Leverage makes it clear that design is not just about the end product, it’s about working together strengthen social ties within neighborhoods. Implicit in the projects that Leverage illustrates is the belief that small ideas can build confidence in a community and create a new identity and hope for its future.

To Miller, the Collaborative’s projects are like a “series of drips” rather than a major force for change. But there are a lot of drips. Pool them together and what appears is the great promise for the future of Philadelphia’s neighborhoods.

Leverage: Strengthening Communities Through Design is available online and at the AIA Bookstore and Design Center. Also check out the Leverage exhibition at the Center for Architecture now through October 23.