Copenhagenize Us: Next Year 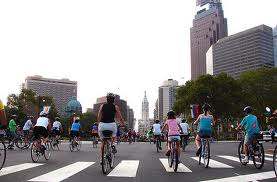 Despite being top big American city for bike commuting, Philadelphia was not ranked in the 2011 Copenhagenize Index of best bike cities in the world. “We had to make some tough decisions on which cities to cut/include this year,” says Mary Hudson, the director of planning for Copenhagenize Consulting. But, they are watching. “We are big fans of Mayor Nutter and know he is making some really great moves toward bicycle culture. With his political will, the cross town bike lanes, and continued implementation of the Bicycle and Pedestrian Plan we hope to rank Philadelphia next year.”

Perhaps the warriors at the Bicycle Coalition of Greater Philadelphia can help make this happen (and if they would just fill the 3.8 million potholes). Portland was included in the 2011 rankings in part because they advocated for a place on the list.

For my piece earlier this week on the Copenhagenize Index, click HERE.