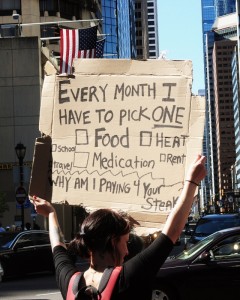 Our Katrina Ohstrom, urban explorer, spent part of the day yesterday at the Occupy Philadelphia protest at City Hall. We’ll have some of her photos and a short dispatch in News a little later. I suspect she’ll be there as long as the occupation lasts, so you can count on more as the days, and possibly, weeks go by.

Some of you might wonder what we’re doing covering the protest. What does it have to with the meaning and evolution of place? What does it tell us about the past-present-future of this city? The answer, of course, begins with a story.

Having lost its bearings as the nation’s financial capital in the late 1830s, Philadelphia reemerged as the railroad capital of the nation. The Pennsylvania was the largest; the Philadelphia and Reading, hauling the black gold from the Pennsylvania coal lands, was second best, but hungry to challenge its rival. The Reading’s President was a megalomaniac named Franklin Benjamin Gowen (for whom Gowen Avenue is named); Gowen was a Robber Baron supreme, in the age of extreme wealth and inequality. In her recent biography of New York anarchist leader Emma Goldman (Emma Goldman: Revolution as a Way of Life, Yale University Press), Vivian Gornick lays out the territory:

In the last decades of the nineteenth century and the first of the twentieth, all over Europe as well as in America, as the heartlessness of Victorian industrialism deepened in the coal mines and clothing factories, steel mills and lumber camps, wherever roads and houses and bridges were being built, a desperation of relations between those who owned and those who labored was growing ever more deadly.

Gowen hungered for the confrontation, breaking up the Molly McGuires, and then in a particular trick of Victorian industrialist power, he sat as their prosecutor. As Gornick puts it:

Whenever worker protest mounted, hired guns–often aided by the local police, national guards, or state troopers–appeared to shoot at, jail, blacklist, and, if necessary, kill the protesters and their organizers. 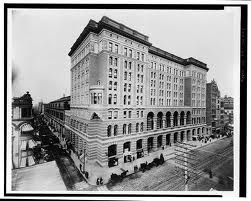 But Gowen was a victim of his own greed. The Panic–read depression–caused by railroad overspeculation reduced the price of coal, which in turn reduced the Reading’s profit. Yet Gowen pursued a new passenger line to rival the Pennsy, overextending, and by 1884, crashing the railroad. J.P. Morgan eventually saved the Reading, Gowen killed himself, and by 1893 big capital had backed the construction of the nation’s largest rail station, the Reading Terminal. That’s the year of the next great panic, also caused by railroad competition and overextension, and interestingly the moment the leaders of the Pennsy decided they wouldn’t be outdone. Their terminal, the prickly Gothic station at Broad and Market, would have to become the largest train shed in the world.

Which brings us back to City Hall, now mostly built, capital in the city of William Penn most unequally shared. Unemployment in the early 1890s creeping up, working conditions deplorable. As Gornick tells us:

Everywhere, the protesters replied in kind: with guns of their own, or even dynamite, the poor man’s only real source of return fire. 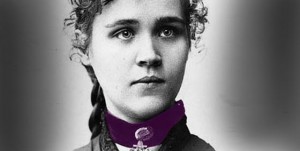 And there, a few years later, stood the fierce and beautiful Voltairine de Cleyre, Philadelphia’s moral voice of the oppressed, feminist, friend and ally of Emma Goldman. In 1901, she began, as her biographer, Paul Avrich, notes:

a series of open-air meetings in different parts of the city, but especially at City Hall Plaza, in an effort to win new adherents. Voltairine threw all her energy into this work, “speaking in the open air, getting ready copy for leaflet, journeying to the printer, dodging the policemen while I distribute the leaflets under doors (there is a fool municipal regulation against it) collecting dues, writing postal cards to lazy workers…”

This, then, is the heritage of City Hall. Not yet even fully complete in 1901, it was sanctified: open territory. The heart of the city still beating out beneath the founder’s benevolent hand. Freedom and equality not yet resolved.