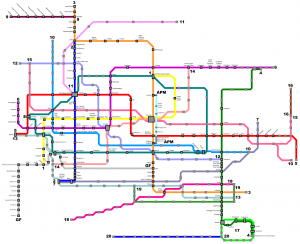 Trade with Canton in Southern China helped Philadelphia get rich in the 18th century. The connection to that city was a notable one, as Philadelphia homes filled with Chinese pottery and silks and the merchant trader Stephen Girard hung portraits of his Chinese business partners. The Philadelphia-Canton connection was also notable for the length of the journey (Girard had his ship captains stop constantly, doing business at ports along the way) and for the strange way the Delaware Bay on one end of the trip perfectly mirrored the Pearl River estuary on the other.

Canton is now the 12.5 million person mega-city Guangzhou, like Philadelphia a leader in higher education and medicine.

Until 1997, Guangzhou had no metro system. But sustained investment, nimble leadership, and creative public policy since then has made the city a global mass transit heavyweight. Guangzhou Metro has 4.4 million riders a day, a contactless fare system, and a consultant division, which advises other cities on how to expand mass transit (how’s that for innovation in the public sector?).

All this points up our lack of leadership and imagination on this key facet of urban development. Last week, facing the prospect of having to act on transit issues, Governor Corbett said he already had “too many balls in the air.”

It’s not fair, of course, to compare American and Chinese cities, but neither is it right to ignore what these fast-growing, by necessity innovative places are doing. In fact, the more we try to connect to that broader urban world, the more we will be compelled to take our own future seriously. We might say it’s a strategy that worked for Stephen Girard.