Seashore Of The Northeast

Frolicking at Boulevard Pools in 1935

The busy intersection of Roosevelt Boulevard and Tyson Avenue in Mayfair will get even busier when the Wawa mini market and gas station on the northeast corner opens later this year. A humble use for what was, from the 1920s to the 1970s, one of the largest outdoor swimming and recreation centers in the nation–Boulevard Pools.

Situated on seven acres on Roosevelt Boulevard, Boulevard Pools opened on May 28, 1928. It included two acres of swimming pools, a ballroom, and a locker room to accommodate 6,000. Surrounding the pools were grandstands where spectators could enjoy water shows. There was sand, picnic tables, and trees. The sandy area was used as an ice skating rink in the winter.

Newspapers dubbed Boulevard Pools the “Northeast’s seashore.” Most of Northeast Philadelphia was still undeveloped at this time, however, and the venue’s clientele came primarily from the more densely populated areas of Frankford, Kensington, and neighborhoods to the south. Admission was twenty-five cents for adults and ten cents for children. 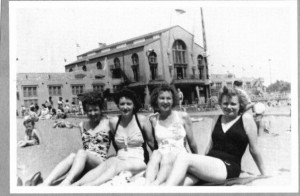 In 1930, over 50,000 visitors traveled up the Boulevard to “the Pools” to escape the summer heat of the city streets. Lifeguards routinely provided the entertainment for the water shows. Toward the end of the 1930 season the owners tried to boost attendance by staging a wrestling match with an alligator. One of the lifeguards agreed to wrestle the alligator, whose mouth was to be tied shut. During the match, the rope slipped and the alligator bit the lifeguard. His brother jumped in the water to help, whereupon the alligator turned and bit the brother’s hand. The audience of some 1,500 was horrified by the blood. The man’s arm had to be amputated. Attendance was never again the same. 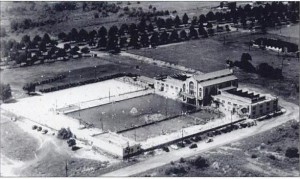 In the 1940s and 1950s Boulevard Pools became a swim club charging annual fees. The ballroom was used for wedding receptions and weekly dances. At the end of the 1976 summer season, citing rising maintenance fees, owner Harry Blatstein, father of developer Bart Blatstein, closed the place down. The complex was demolished in April 1978. The ice rink was saved and converted to a rollerskating rink with an adjoining family entertainment area. The land eventually became homes, a strip of stores, a K Mart, a car dealership, and the roller rink.