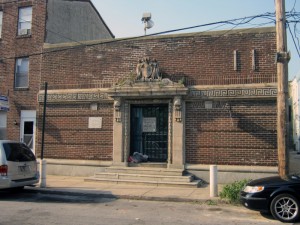 The bathhouse that served the Italian Market neighborhood for nearly a century stands vacant. The overgrown Fante-Leone pool, located at the northwest corner of Montrose and Darien Streets, has been closed since 2004.

Fante-Leone was the subject of Jamie Gaffke Shindell’s 2006 historic preservation master’s thesis at the University of Oregon. Because the pool was sold to a private developer it is unlikely to be restored to public use, says Gaffke Shindell in “Public Urban Pools as Significant Social Spaces: Revitalizing Philadelphia’s Montrose and Darien Streets Pool.” Nevertheless, she says, it would best serve its community as an indoor pool or as a sensitively landscaped pocket park. Gaffke Shindell asserts that as either a pool or a park, the site could retain its historic character while also increasing the diversity of public spaces around the Italian Market. 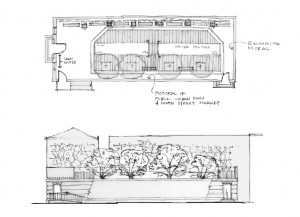 Rendering of park at Fante-Leone pool by Jamie Gaffke Shindell

From roughly 1895 until 1930, during an era of social reform, the City of Philadelphia and the Public Baths Association built bathhouses in densely-populated, immigrant neighborhoods like Southwark and Kensington. The vast majority of the residents of those communities had no indoor plumbing, thus they were unable to bathe or wash clothes.

In 1905, the city built the Fante-Leone pool at the center of an impossibly dense Italian and Russian Jewish immigrant neighborhood. Originally, the single concrete basin was an indoor pool, fully enclosed within a building bearing a classical facade and ornate entryway. Sometime between 1917 and 1920, amidst growing concern about hygiene, the roof and upper story were removed. After providing relief from summer heat for almost a century, the well-utilized pool (and nine others) was closed due to budget cuts. 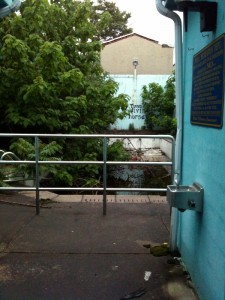 The pool’s owner since 2006, Florio Mega Construction, began trying to sell the property in 2007. It is currently listed with Coldwell Banker Preferred for $477,500.