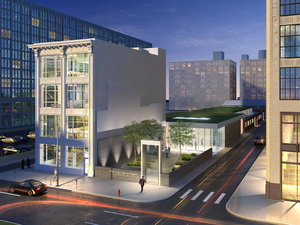 Erdy McHenry rendering of the new School of the Pennsylvania Ballet

There aren’t many win-win situations involving both the city and the suburbs. And ballet and burlesque helping to revitalize the same neighborhood is rarer still. Yet both may come to pass thanks to the Pennsylvania Ballet’s new home planned for North Broad Street at Wood.

The ballet company’s executive director touted the project’s half block distance from the Vine Street Expressway, telling NewsWorks that it would be convenient for parents bringing their kids in from the suburbs for classes.

Even more importantly, perhaps, the Erdy McHenry Architecture-designed complex will provide another link in the chain connecting Center City with new projects further north on Broad Street, such as Bart Blatstein’s State Office Building at Spring Garden, the Wilkie Suburu/Biberman Building project at Green, and someday (maybe, hopefully) the decaying hulk of the old Divine Lorraine Hotel at Fairmount. 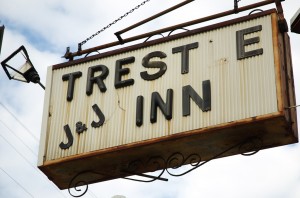 Meanwhile, the project connects the western edge of the blossoming Warehouse District to Broad Street. Cafe Lift and the Prohibition Tap Room endured several long years in the wilderness, but are about to be joined by a revamped J&J Trestle Inn on 11th and Callowhill, the former go-go bar’s dancers replaced by retro burlesque shows (a DesignPhiladelphia event is scheduled for tomorrow).

The Underground Arts Space in the Wolf Building opened last year. Construction on the Goldtex Building, currently sporting Interface Studios’ Big Green Arrow, is about to begin. And even the national publications have picked up the Reading Viaduct story, which could one day become a dramatic ribbon wrapping it all together.