Eyes On The River

Now that the Race Street Pier has people genuinely excited about visiting the Delaware waterfront, the challenge becomes getting them there. Traveling down Race from 2nd Street means crossing under I-95 and over Delaware Avenue, an inhospitable passage.

The Race Street Connector attempts to ease the journey through new lighting, sidewalks, maritime bollards–and art. Marquee is a four-foot by 60-foot LED screen mounted on the west facing beam of the I-95 overpass. The screen is connected to a camera, which is mounted to a pier and pointed at the water. We spoke with Richard Torchia (RT), Director of the Arcadia University Art Gallery, and Aaron Igler (AI) of Greenhouse Media (co-creator Matthew Suib, also of Greenhouse couldn’t be there), about their work, which was funded by the City’s Percent for Art program in cooperation with the Delaware River Waterfront Corporation.

PW: Do you think the Connector is working? 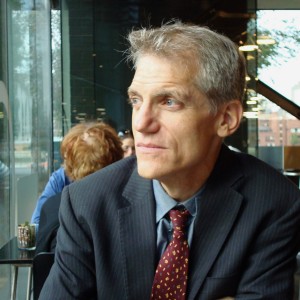 RT: We wanted to take advantage of the dark space–they were calling it the tunnel of death at several community meetings that preceded the project. It was something people didn’t want to walk through in the day as well as at night.

AI: Plus the noise is deafening. Now we’re witnessing people exhibiting a comfortable demeanor and casualness as they transit the space.

PW: I was impressed by how many people I saw using the connector–joggers, couples, even groups of businesspeople.

RT: There was not a lot of traffic before. Twenty minutes would go by before you’d see a pedestrian.

PW: How does the LED screen work?

AI: There is a networked security camera at the end of a pier pointed east that feeds a continuous stream of live-feed images back to an equipment cabinet closer to the Marquee screen which displays this live stream in real time. The camera is approximately 15 to 20 feet above the water, depending on the tide.

I-95 occludes where you would otherwise see the river. The camera is looking at the section of river that you look at as you come down Race Street. In a way (Marquee) is a surrogate set of eyes for that view.

RT: The subject or the target of the lens is really the thing that you’re not seeing. The piece is giving back a portion of the view that I-95 takes away. This is what is being redressed. Marquee does what the pier does, but in a very different way.

PW: There isn’t a lot to see on the screen on a sunny day.

AI: Especially with afternoon direct sunlight it is difficult. Part of it has to do with the way the sun is hitting the water. The camera is facing east and the sun is projecting east, so there is a decrease in the contrast in the scene and in the screen itself.

RT: The idea is that it is streaming all the time, regardless. There is something about that continuous link and not breaking it.

PW: I love the Heraclitus quote you mentioned, “you cannot step into the same river twice.”

RT: It’s a robust, technological system directed toward fragile, ephemeral phenomena. It transposes natural occurrences and climatic conditions. The Duck Boat sometimes shows up, and sometimes wildlife. So, it is a portrait of different conditions.

PW: The images on the LED screen look fairly pixelated.

RT: The screen is unusually porous. Due to the restrictions we had to work with, we came to accept the abstraction that was going to be the result of a more open grid. We enjoy that it’s possible for people to walk by the screen and not know what it is. Initially, people may see it as a programmed, abstract pattern, as opposed to a mediated representation of the surface of the river. We hope it repays curiosity and encourages return visits.