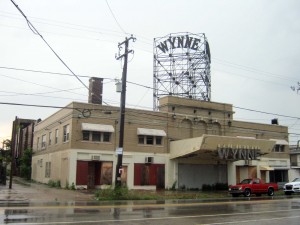 Community Design Collaborative’s twentieth anniversary is approaching and in celebration, the organization will publish a book highlighting their work. Leverage: Strengthening Neighborhoods through Design, which will be released in October, will highlight some of CDC’s best work, including the Wynne Theater feasibility study, completed last March.

The vacant Wynne Theater, located at the northeast corner of 54th and Arlington Streets in Wynnefield, was built in 1927-1928 for the Stanley Company of America, which became Stanley Warner Theaters. From its opening until its closing in 1955, the 1,663-seat theater showed second run films and double features. Shortly after the theater closed, it was converted into a multi-purpose community hall, hosting celebrations and events for almost four decades. In 1993, the hall’s last proprietor passed away, leaving the 32,000 square foot building unused and unmaintained.

The firm that designed the yellow-brick, Renaissance Revival-style theater, Hoffman-Henon Co., is best known for designing movie theaters as well as churches throughout the city and suburbs. They are responsible for the highly-visible Boyd Theater on the 1900 block of Chestnut and the recently converted Jumbo Theater at Front and Girard.

Three years ago, the CDC selected the Wynnefield Overbrook Revitalization Corporation, which counts Mayor Michael Nutter among its board members, to receive a service grant. The grant was used to create conceptual plans for redevelopment of the Wynne Theater complex. Completed in 2010, the report presented several reuse options. 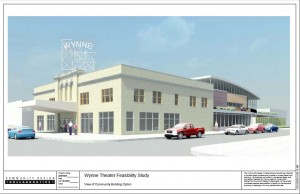 The CDC’s vision for the property. Photo courtesy of the Community Design Collaborative

According to WORC board member Wadell Ridley Jr., community stakeholders favored the community center option. That option entails replacing the unsafe theater space with a large community hall above ground level parking and rehabilitating the historic headhouse so that it can again house retailers on the ground level with residents above.

Unfortunately, the project has not yet gotten off the ground. Ridley blames the fact that there is no clear title to the property and the reality that the WORC has been unable to identify a developer willing to invest the $6.7 million estimated cost.

Despite those obstacles, the tide may be changing. For the first time in over twenty years, the neighborhood is experiencing investment. Just blocks away, at the intersection of 54th and Wynnefield, eight new townhouses are under construction.