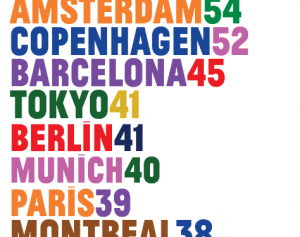 Copenhagenize, roughly the worldwide equivalent of the Bicycle Coalition (they also maintain a bike Copenhagen-centric blog), has released its annual list of the best bike cities in the world. See that list HERE. The winner, on a point scale of 60, is Amsterdam, followed by Copenhagen, Tokyo, Barcelona, and Berlin. The top US city is Portland (#10, but much smaller than most of the other cities on the list); the best in North America is Montreal (#8). Philadelphia did not make the top 20.

It’s worth noting that five years ago few people bicycled in Barcelona; now it is in the top five. Also, Montreal, wonderfully comparable to Philadelphia in scale, has developed excellent, protected bike lanes. But otherwise, there is little Montreal has done that Philadelphia can’t do.

Also useful is the criteria used by Copenhagnize to rate cities. Among them: facilities (racks, space on trains), infrastructure, advocacy, politics, bike sharing, and things like gender split of riders and ridership trends. How close did we come in 2011? Can Philly–with a greater share of bike commuters of any large American city–break into the top 20 in 2012? Hopefully, the folks from Copenhagenize can help us sort through the data.