On The Face Of It, Some Hope? 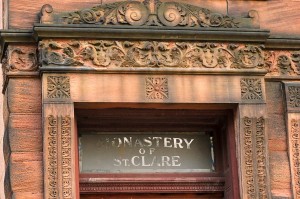 The partially demolished Monastery of St. Clare on the corner of Girard and Corinthian may retain part of its facade. The developers are considering incorporating the facade of the church–but not those of two adjoining brownstones–in a new plan for the property, according to their attorney, Joseph Beller.

“But it’s not the only thing being considered,” Beller said. “There’s a lot to it.”

This may come as cold comfort either way to preservationists, who believed the small Romanesque church built in 1918, and the two brownstones, deserved to be listed on the Philadelphia Register of Historic Places. The church compound capped off a magnificent, unbroken block of brownstones, and was part of the Girard Avenue Historic District listed in the National Register of Historic Places.

The Francisville Neighborhood Development Corporation, which had opposed the demolition, is now lobbying the developers to reduce the number of apartments and save the facade, said Executive Director Penelope Giles.

“We’re trying to salvage what’s left so that we do get a good project and one that respects the historic nature of the block,” Giles said.

Along with stately architecture, the monastery possessed a rich history that contributed to its significance. The nuns lived a cloistered life there for almost 60 years, baking communion wafers to earn a living, with two extern sisters handling dealings with the outside world. The order eventually shrank from 42 sisters to 24, and unable to pay for the upkeep of the property, the nuns moved to Bucks County in 1977. 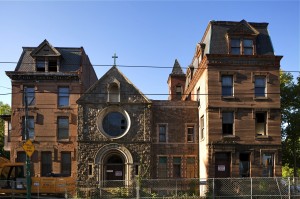 Monastery of St. Clare prior to demolition | Photo: Peter Woodall

The failure to protect the site owes much to Philadelphia’s ad-hoc and overburdened system for preserving historic buildings, which often relies on neighborhood residents to raise the alarm when a property is in danger of being demolished.

In this case, developer 2012 West Girard Associates initially proposed renovating the buildings, which had stood empty since the Poor Clares left, and turning them into condos. The community approved this plan, but the market dipped and nothing was built. Meanwhile, the buildings continued to deteriorate.

The developers unveiled a new plan in June to clear the site completely and build 42 apartment units plus parking. The community voted against it 53-1, however Licenses & Inspection had already issued a demolition permit. Once that happened, it was too late to prepare a nomination, which would have protected the buildings from demolition if approved. 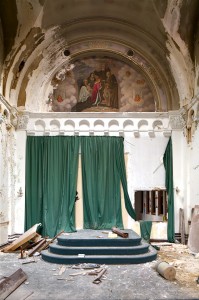 “It’s hard to anticipate these things,” said John Gallery, Executive Director of the Preservation Alliance of Greater Philadelphia. “That’s why we’ve wanted to do a comprehensive survey to establish priorities, but we haven’t had the money.”

Gallery said that although the process usually takes several months, nominations can be pushed through in a matter of weeks or even days in an emergency.

“The lesson to learn here,” said Gallery, “is that if there’s something in your neighborhood that you think is distinctive and has value and you wouldn’t want to lose and particularly if you think someone is thinking of doing something, alert the Historical Commission and the Preservation Alliance early enough so there will be time for a nomination.”

See more images from the inside of the monastery here

John Vidumsky contributed research and reporting to this story.