In late August 1774, as John Adams and his fellow delegates from Massachusetts were approaching Philadelphia to attend the First Continental Congress, they were met in Frankford by a group from Pennsylvania that included Benjamin Rush, Thomas Mifflin, and others. The two groups adjourned, probably to a local tavern, to discuss strategy for the upcoming Congress. As Adams wrote many years later, the “conversation, and the principles, facts, and motives, suggested in it, have given a color, complexion, and character, to the whole policy of the United States, from that day to this.”

What Adams called “the Frankfort Advice” would prove to be a pivotal conversation in American history. 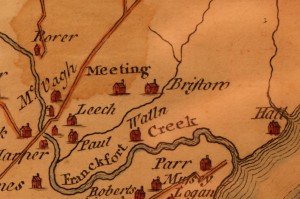 Frankford was at that time a village of a few hundred inhabitants. Located on the King’s Highway (now Frankford Avenue), one of the main roads that led from Philadelphia to New York and Boston, it was a natural stopping place for those traveling to Philadelphia from the north. At the meeting in Frankford on the eve of the First Continental Congress, the Pennsylvanians told their Massachusetts counterparts that the other American colonies were deeply suspicious of them, that Massachusetts was viewed as too radical and too bent on independence from Britain, a concept that at that time many of the other delegations weren’t quite ready to accept. The Pennsylvanians advised the Massachusetts delegates to take a lesser role in the upcoming Congress, to not speak of independence just yet, and to let Virginia take the lead, since Virginia was then the largest and wealthiest colony in America and its delegates widely respected.

As Adams later wrote of the advice,

This was plain dealing … and there appeared so much wisdom and good sense in it, that it made a deep impression on my mind … without it, Mr. Washington would never have commanded our armies; nor Mr. Jefferson have been the author of the Declaration of Independence; nor Mr. Richard Henry Lee the mover of it; nor Mr. [Samuel] Chase the mover of foreign connections … You inquire why so young a man as Mr. Jefferson [then 33 years old] was placed at the head of the committee for preparing a Declaration of Independence? I answer: It was the Frankfort advice.

Unfortunately, we don’t know where in Frankford this critical meeting took place, as there is no mention of the exact location in the historical record. Most likely, it was in one of the two main taverns in the village at that time: the Jolly Post Inn, which was located at the northwest corner of what is now the intersection of Frankford Avenue and Orthodox Street, or McVeagh’s Tavern, also known as the Old Inn, located near the current Womrath Park at Kensington and Frankford Avenues. While the Jolly Post was the more prominent establishment, also serving as a post office and stage coach stop, historical researcher Joe Menkevich, who has studied Frankford history extensively, believes that it may have been McVeagh’s Tavern, run by the widow Rebecca McVeagh, whose family included well-known patriots. Some of her in-laws became generals in the Continental Army and her son Benjamin became a colonel. Until further evidence comes to light, however, we can only speculate on the exact location of this important meeting that shaped the course of American history.