Where Are My Mermaids and Horses? 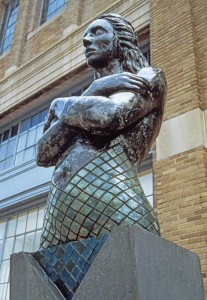 A mermaid of Riverwalk—missing in action for years now. From Andrew Leicester’s website (andrewleicester.com).

Along Columbus Boulevard north of Market Street, the sidewalk in front of Piers 3 and 5 Condominiums used to be a real showcase for sculpture. This was stylized, contemporary art called “Riverwalk,” created by sculptor Andrew Leicester in 1990 on 800 feet of walkways in the front of the condominium complexes.

“Riverwalk” celebrated Philadelphia’s central role in the development of America’s maritime economy–think 18th century globalism–and the sculpture was meant to incorporate the history and mythology of the Delaware waterfront. Well, at least for a short while, it did.

Leicester currently lives in Minneapolis, but was born in England and immigrated to the U.S. in 1970. He’s created public art projects that range in size and scope from small courtyards to municipal transit plazas, park entrances and water gardens. Leicester does extensive research on the the social and historical characteristics of each location in order to develop a work’s iconography.

Leicester was hired to devise a plan to make Columbus Boulevard appealing. This was a true revitalization effort, for the street was at the bottom of the barrel at the time. It wasn’t even called Columbus Boulevard in 1990. It was still known as Delaware Avenue, the original name that Stephen Girard gave the waterfront way when he left $500,000 to the city to create it. In 1992, the Italian-American community of South Philadelphia persuaded City Council to celebrate the 500th anniversary of Christopher Columbus sailing to the New World by renaming that part of Delaware Avenue after the explorer. 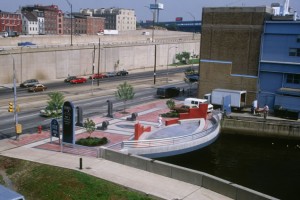 At the south end of Columbus Boulevard, near Market Street and Pier 3: resembling an abandoned ship hull and serving as an observation deck. From Andrew Leicester’s website (andrewleicester.com).

Leicester’s “Riverwalk” included a form on the south end (near Market Street) that resembled an abandoned ship hull and serves still as an observation deck. Gargoyle heads pop out of its portholes and nautical images are cut into the ground. Farther north, he installed stylized horses, stevedores, and representations of ship figureheads: full length mermaids with green-blue scales.

Spearheaded by the Redevelopment Authority, the project cost $900,000, paid for by Pier 5 developers under the city’s One Percent For Art program. At the time, the Inquirer noted glibly that “What is being memorialized on the Riverwalk is the conversion of the city’s central waterfront from commerce and seafaring to uses such as condominiums, marinas and restaurants.”

So what happened to the mermaids and horses of Riverwalk? In about 2002, Columbus Boulevard was widened with bump-outs to enable better parking along the street. Much of Leicester’s Riverwalk was eliminated in the process. By then, the ceramic gargoyle heads and horses had fallen apart, possibly due to vandalism. Even the scales of the mermaids were worn. 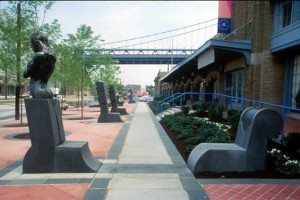 One thing that remains just south of the entrance to Pier 3 are two back portions of Leicester’s fanciful horses. These “tails” are concrete blocks that merely stick up out of the ground and make no sense without the front part. There’s no telling where the front of the horses are, and if even if they still exist. At least the tails blocks can be used as seats.

To think: Leceister’s vision is all but lost, the lively (but deteriorating) horses and other icons of “Riverwalk” were carted away, probably forever, after being on the scene just over ten years. And without a single cry of protest or lament.

I want my mermaids and horses back!