Say Goodbye to the Fortieth Street ME Church 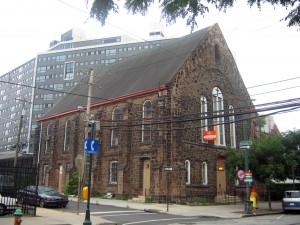 In the shadow of the Radian | Photo: Rachel Hildebebrandt

At the southeast corner of 40th and Sansom Streets in University City, a 139 year old church bearing a FOR LEASE sign stands in the shadow of the Radian and the Fresh Grocer. The sign suggests that the church building is for lease, but developer MSC’s website indicates otherwise. The historic church will be demolished to make way for a two-story vanilla box containing 7,000 square feet of ground floor commercial space by Maryland-based firm Cannon Design.

Owners P&A Associates (developers of the Murano at 21st and Market Streets and the St. James on Washington Square) are in the process of securing tenants and hope to begin demolition of the church before the end of the summer.

Completed in 1872 for the Fortieth Street M.E. Church, the church was built during a period of unprecedented development in West Philadelphia. Despite the fact that the building is one of many, it is an important part of the area’s heritage. The church building itself represents a seven year planning and financing campaign by a small, less well-to-do congregation who previously held services on site in a wood frame chapel. In addition, it is a rare example of the work of architectural firm Sloan & Hutton. Samuel Sloan (1815-1884) is best known for designing state hospitals, churches, and residences as well as for authoring several books on architecture. Few examples of Sloan’s work remain. One of them is the Kelly Writer’s House two blocks away. Addison Hutton (1834-1916) is the architect behind many notable local buildings including Arch Street United Methodist Church, the Germantown Friends Meetinghouse, the Historical Society of Pennsylvania, and Ridgeway Library (now Philadelphia High School for the Creative and Performing Arts).

MSC also manages the former Fourth Reformed Presbyterian Church, which is located at the intersection of Manayunk and Monastery Avenues in Roxborough.