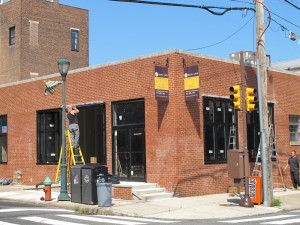 New retail at 21st and South.

The just-opened 2115 South Lofts by Grasso Holdings brings 27 new apartment units to the former Amalgamated Center at 21st and South. The project is an interesting reworking of a tired corner in the heart of Graduate Hospital. The apartments are part of a mixed-use project that will include new outposts of Honey’s Sit ‘N Eat and City Fitness Gym.

The Amalgamated Center is a lesser-known but important example of the 1930s Moderne style in Philadelphia. The building has sweeping rounded corners much like the base of the famed PSFS Building, built around the same time. Designed by Magaziner & Eberhard–the same architects as the soon-to-be demolished Hillman Medical Center at 21st and Chestnut–the building was once home to the Philadelphia headquarters of the Amalgamated Clothing Workers of America. Apart from housing offices for the workers’ union, the building acted as a social club and community center for the workers and their families. In the 1980s, it became medical offices for Graduate Hospital. 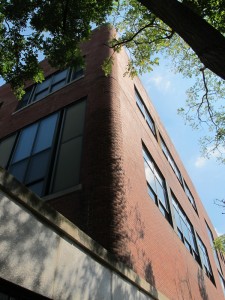 Meanwhile, both the University of Pennsylvania and Children’s Hospital have acquired significant portions of land on the east side of the river. CHOP plans a one million square foot new facility on the site of Springfield Beer Distributor and the gutted munitions factory that had been slated for condos in 2006.

Indeed, completion of the South Street Bridge has G-Ho stirring with development.

Toll Brothers continues to expand its suburban-colonial footprint in Graduate Hospital, with a long anticipated apartment complex at 2400 South. This is regrettable retrograde design, but the project nonetheless will fill in a significant gap in South Street’s fabric. And just a block south, at 24th and Bainbridge, developer Steven Rodriguez is breaking ground on a 4-story apartment building. It’s hard to judge the design from the renderings available, but what we see is an unabashedly modern building squeezed into a challenging triangular site. In any case, the floor-to-ceiling windows and aluminum trim will create a strong contrast with neighboring brick rowhouses. 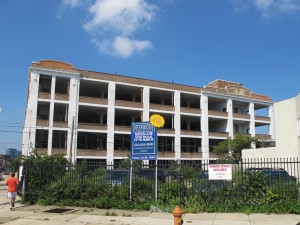 There are several large buildings like the Amalgamated Center on and around South Street West, especially closer to the river. The Toll Brothers project regrettably involves demolition of one of them, a beauty of a warehouse at the rear of the 2400 South property. Will CHOP demolish the former munitions factory? Or will it serve as a platform for the South Street west of the future?