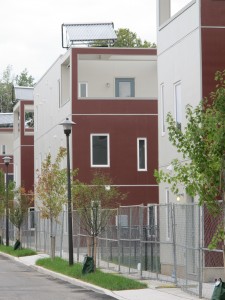 Philadelphia observers have grown weary of low-density, suburban-inspired subsidized housing. The just-completed Sheridan Street Houses, at 7th and Montgomery, in North Philadelphia, seem to be yet another entry in this genre. But architect Brian Phillips’ design is more sophisticated and may provide a model for affordable housing in the future.

Phillips, principal of Interface Studio Architects, frankly acknowledges what he calls the “complicated nature of contemporary urbanism,” pointing to the often awkward relationship between suburban-like new construction and existing fabric nearby. Instead of trying to design the ideal city block as a response, Phillips took a far more pragmatic approach. “You have to think about what the chassis of the building is, what its needs are, and then hatch the design out of that.”

In other words, Phillips and his partners approached Sheridan Street like an industrial design project. They did not try produce a charming street of brick rowhouses with front porches, but a new type of sustainable urban housing that seeks to improve quality of life for less-advantaged families in an affordable way. The houses are selling for about $150,000, and residents will be responsible for upkeep. Although the price seems high, the houses, at 1350 square feet each, are larger than the typical North Philadelphia rowhouse.

The project was a joint effort between Interface Studio Architects, the Asociación de Puertorriqueños en Marcha, and the Community Design Collaborative. Since 2005 the three have been working together to devise an innovative solution for this vacant and overgrown block between Montgomery and Berks Street. 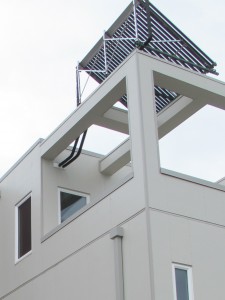 The result is a carefully conceived and executed work of sustainable infill housing. Designed with an eye toward social and environmental health, the new Sheridan Street houses offer a possible vision of the future of North Philadelphia. Using inexpensive materials and incorporating the latest in energy-saving technology, Sheridan Street will provide homes to thirteen families with little impact on Philadelphia’s aging infrastructure.

Despite an abundance of blank wall space, the basic rectangular plan and three-story elevation evokes the traditional Philadelphia rowhouse. The development departs from the traditional by using new materials and altering the relationships between the houses and the houses to the street. Instead of forcing a row of repetitive, identical facades onto narrow Sheridan Street, ISA gave the block a little more room to breath. The modular houses are separated into L-shaped pairs, allowing for generous green space in between and behind. Although the houses’ fiber cement siding looks inexpensive, it’s actually tougher than vinyl and should last longer.

The architects believe the configuration will support the social life of the block and reduce its environmental impact. The grassy lawns will allow for interaction with next door neighbors as well as those across the street. Turning Sheridan Street itself into a social space is key. The lawns also provide a pervious surface for water run-off, as well as room for a rain barrel to collect water from the houses’ gutters. 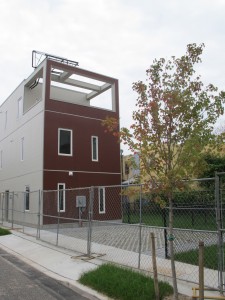 Other energy efficient features include sun shades above south facing windows and solar panels above third-floor terraces. ISA’s goal wasn’t simply to create an affordable and energy-efficient house, but a livable one too. The third-floor terrace is the kind ubiquitous amenity found on new, market-rate rowhouses, but rarely incorporated into subsidized developments like this one.

Because Sheridan Street is honest about the realities of program, cost, and prescribed density, Phillips sees the project as a prototype for affordable housing throughout Philadelphia. It’s easy to imagine the Sheridan model being implemented elsewhere. Demand for decent, affordable space is growing, as is the city’s endlessly expanding roster of vacant land.