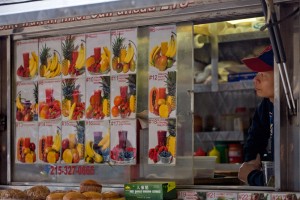 Now we know as a matter of fact what the street has been telling us: this is an impoverished nation. In Philadelphia its old news, but even here, close observers of the urban poor are shocked by the depth of hunger and deprivation.Half of children living in Philadelphia’s first congressional district (river wards) suffer food insecurity.

The very poor often depend on the informal economy–globally, the billion urban squatters certainly do–but one part of that equation in Philadelphia has been disappearing. With a loss of more than 250 community gardens since 1994, localized food production is faltering just when it is needed the most. In fact, community gardening grew out of the literal (and figurative) economic hole created by whipsaw deindustrialization in the 1970s, attenuating collapse of whole neighborhoods. In 1994, community gardens produced nearly $2 million in food for residents and non-profits that serve the poor.

Now, after shifts in congressional funding (leading to the termination of Penn State’s urban gardening program, among other programs) and changes in city land policy that deter small-plot gardens, the 500-600 gardens have dwindled by half, or more. This is a fundamental loss, considering that even a small garden–think Las Parcelas in Norris Square–can produce $10,000 worth of food in one season.

Of course, as Mark Bittman noted in the New York Times, Philadelphia is the pace-setter in urban food policy. The Food Trust is finding ways to put fresh, locally-raised food in the bellies of school children and Tuesday it debuted a farmers market at the Frankford El terminal.

But in the next several months we’re going to see a renewed conversation on the uses of vacant land city-wide. There’s more of it, certainly, than in 1994. We’re going to hear about reforestation and pop-up initiatives, but oughtn’t we–in the city of John Bartram and Ernesta Ballard–also consider a return to our roots, and encourage more people to grow their own food?