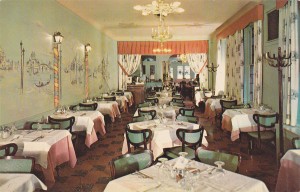 In Philadelphia, flashy neon signs like those in Los Angeles, Chicago, and Seattle are few and far between. Maybe it’s because of our colonial roots, or perhaps because a greater number of ours have been taken down. One of the remaining gems, the Philip’s Restaurant sign, hangs from a brownstone mansion on South Broad Street. Although the sign has ceased to glow since the restaurant closed over a decade ago, it continues to attract the attention and pique the interest of passerby. We spoke with the Italian eatery’s former proprietor, Phyllis Muzi, about its past.

RH: Tell me about the restaurant’s history.
PM: My husband’s father opened it in 1942 or 1944. I forget which. At that time, we were at war with Italy, so he used his first name (Philip) instead of his family name.

RH: What was your role there?
PM: It was family-run. We did everything. I mainly hostessed and waitressed.

RH: What was it like on a typical Friday or Saturday night?
PM: Lines were out the door. It was always very busy. But none of the customers were from South Philly. They came from the Main Line and out of state.

RH: What were the most popular dishes?
PM: Veal and T-bone steak.

RH: And what were the most popular drinks?
PM: It changed from year to year. When we first started working, the girls would drink pink ladies, pink squirrels, and grasshoppers. The guys liked scotches and vodkas. 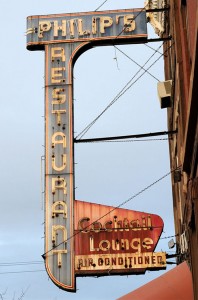 RH: How do you use the space now?
PM: Everything is set up the same way, even the tables and the chairs, but it’s no longer open for business.

RH: Do you have any hopes for the site?
PM: No, not as long as I’m alive. I could sell it tomorrow, but I don’t want to. I get calls at least once a week from people who are interested in buying it.

RH: Are you aware of the fact that Philadelphia signage enthusiasts love your sign?
PM: Oh yeah. I see people taking pictures of it. When it went up, it was the biggest sign on South Broad Street. It says ‘air conditioning’ because we were the first Italian restaurant to have air conditioning. The others, Ralph’s, Dante Luigi’s, and Victor’s, didn’t have it.