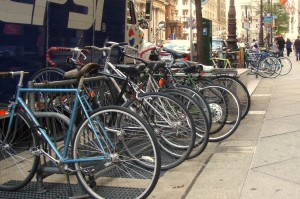 “A culture of cycling,” where parents serve as examples for their children, is one reason Cambridge is bike capital of England. Some 20% of all trips there are on bike and, indeed, bikes are used by everyone. (In Philly, 2.1% of commuters are on bike, the highest rate for a major city.)

Of course, Cambridge has something else going for it. In a city of 120,000, some 43,000 are university students. That’s more than 1 in 3. In Philly, it is more like 1 in 13. And yet, 110,000 students is enough to shape policy. Undergraduates at Cambridge universities aren’t allowed to have a car except under special circumstances. While that’s unlikely to be adopted here, its worth thinking about bicycle amenities to be aimed directly at the student set.

From yesterday’s Possible City: How Philly cycling stands up to Global cities