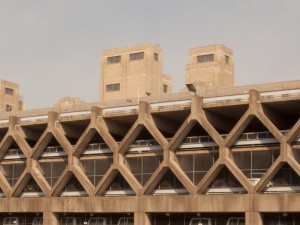 The University of Pennsylvania’s building spree continues with the $80 million Singh Center for Nanotechnology (currently a big hole in the ground at 32nd and Walnut).  The renderings promise a snazzy addition to the desolate streetscape between Penn’s campus and the Schuylkill River.  However it will obscure the west side of a far more prosaic structure—a parking garage—that happens to be one of the city’s modern architectural gems.

The parking garage may be the most despised building type in Philadelphia (or any city).  And while these dull masses of concrete may never be loved, the Walnut Street garage Mitchell/Giurgola designed for Penn in 1963 attempts to at least create visual interest. 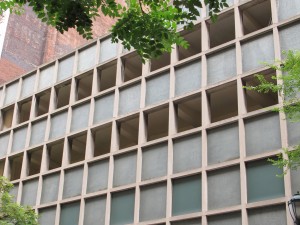 The structure eschews the lifeless rectilinear form of most garages, opting instead for a series of concrete X-shaped trusses on the east and west sides. The carefully designed façade seems to expand like an accordion between the two squat brick piers on the north and south. It may not be a beautiful building, but it does reveal its structure in a striking and elegant way.

Penn’s new research building is certainly preferable to the surface parking lot it replaces, but its construction brings up the question of where purely functional buildings like the parking garage fit within the field of historic preservation. Old industrial buildings like those at the Navy Yard have proven how appropriate they can be for adaptive reuse.  But what about the mid-century parking garage, a building type so specialized in its function that it can’t be used for anything else? 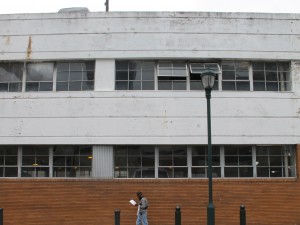 Several other garages in the city from the 1950s and 60s could be attractive if their exteriors hadn’t gotten such short shrift over the years.  The gridded façade of the garage at 1025-29 Chestnut Street, built in 1953, looks dingy.

But the compact building would bring needed life to Chestnut Street if its bunker-like storefront were restored to the all-glass original.  Just around the corner at 11th and Sansom, the “Square Industries” garage from 1950 looks like it’s crumbling, however the first story was constructed of beautiful, high-quality Roman bricks. Just scrub them down, repair the factory-like windows, and the building might bring a little dignity to parking in Center City. 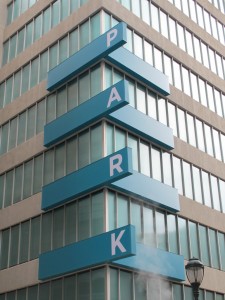 “The Lift” Garage at Sansom and Juniper

One recent project, “The Lift”, at the corner of Sansom and Juniper Streets, rehabilitated the first automatic parking garage in Philadelphia. It now looks as sleek as it likely did in the 1960s, proving that neglected mid-century parking garages can offer more than just a spot to park our cars.