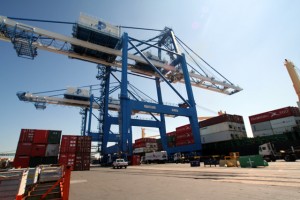 The Panama Canal will celebrate its 100th anniversary, in 2014, with its first ever expansion, adding about 50% more capacity. When the project is completed, 50 ships will pass through the canal per day.

Does that mean more port business for Philadelphia?

Potentially so: the Port of Philadelphia handles more Chilean fruit than any other in the US, 328,904 metric tons in 2010. With the new Philadelphia Wholesale Produce Market on-line, demand is likely to rise. But not only for fruit. Also from the Panama Canal route: in February and March, crop and flower seeds from Chile and Argentina.