Pre-Erie Canal, the Philadelphia Water Works was American know-how sine qua non. No other city in North America could furnish clean water to its citizens, and as a result it was one of the greatest tourist attractions in the US. As you might imagine, it was also expensive to operate, and Philadelphia charged Spring Garden, Southwark, and the Northern Liberties, and the other small cities and districts in Philadelphia County a high fee to tap into the system. 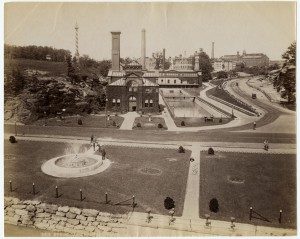 In the mid-1840s, after unsuccessfully bargaining with the City of Philadelphia to lower the cost of water, officials in the Northern Liberties and Spring Garden, growing districts that were also rapidly industrializing, decided to face down the ten-ton gorilla that was Philly and build their own system. The new Spring Garden Water Works, at the present site of the Glendinning Rock Garden, just below the Girard Avenue Bridge along Kelly Drive, would be a mile upriver from the city’s Water Works at Fair Mount. Construction began in 1844 and was completed in 1845. Philadelphia officials, meanwhile, paid careful attention to the Spring Garden Water Works because they feared a depletion of the water supply. They also worried about contamination.

But for nine years until the city and county consolidated in 1854, the Spring Garden Water Works kept Northern Liberties and Spring Garden satiated, despite the occasional outbreak of cholera. After consolidation, the city acquired Lemon Hill, and bit by bit, the factories and estates along the Schuylkill as a means to protect the city’s water supply. This would become Fairmount Park. It was a visionary environmental act by what was now one of the largest cities in the world. The Spring Garden Water Works, in turn, came under the city’s Water Department, part of a network of pumping stations that provided water to the vastly expanding city.