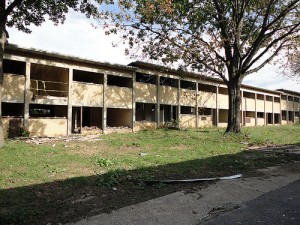 The fate of Liddonfield, the 32-acre former public housing tract in Upper Holmesburg, remains uncertain. Since the Philadelphia Housing Authority demolished the troubled 436-unit housing complex and cleared the land earlier this year the site has been transformed – temporarily at least – into an attractive park-like landscape of lawn and trees.

This is a far cry from the image the property presented in recent years. Built in the 1940s as a military barracks and converted to public housing in the 1950s, Liddonfield had long been in decline and, by all accounts, had come to represent the worst in public housing.

After years of discussion and planning, the Housing Authority moved the last residents out in late 2010 and demolished the complex in early 2011. Staff of the City Planning Commission’s Philadelphia2035, the city master plan, have drawn up preliminary guidelines for the for the site. These guidelines–for homeownership, greenspace, continuation of the grid–have not been finalized. But the possibilities have peaked a great deal of community interest. Attendance soars at local civic association meetings when the issue is on the agenda. 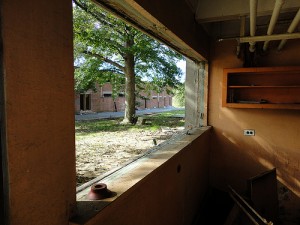 Some fifty years ago, Northeast residents and planners were grappling with the remains of another another massive public housing development: Northeast Village. A sprawling complex on the east side of Roosevelt Boulevard between Red Lion and Comly Roads, Northeast Village was, like Liddonfield, originally built as housing for military veterans and their families following World War II. It was later converted to public housing. Constructed in 1946 and opened in January 1947, it had some 1,400 units spread over 239 acres. The homes were modest one-floor, wood-frame dwellings built in army barracks style.

Northeast Village was indeed a “village” unto itself, with its own stores, fire house, elementary school, and a network of some five miles of winding roads. The streets – with names like Atoll Road and Lagoon Road – were named for South Pacific locations that were familiar to many of the veteran residents. By all accounts, the community was close-knit and the residents civic-minded.

The project lasted only sixteen years. A number of the homes were removed in the early 1950s for expansion of the adjacent Northeast Philadelphia Airport and the rest were demolished in the early 1960s to make way for an industrial park. Now, the industrial park is mostly vacant, as the IRS abandoned its complex there when it moved recently to the old Post Office building at 30th and Market Streets.

Interestingly, both Liddonfield and Northeast Village have active, loyal groups of former residents. Rosemary Reeves, who lived in Liddonfield as a child in the 1960s, maintains a website, where she shares her public housing experience through narratives, photographs and videos. She is lobbying to have a state historical marker placed at the site. Former Northeast Village residents have a Facebook page, where they regularly share stories, photographs, and information, and where you can learn about upcoming reunions and see photos of former residents attempting to find the location of landmarks of their youth in the dramatically altered landscape.