“The City Will Not Remain Static” 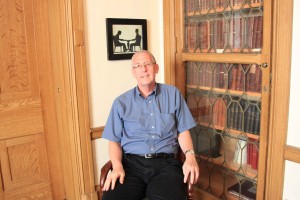 Bruce Laverty in the Chess Room at the Athenaeum. Photo: Lauren Drapala.

We recently sat down with Bruce Laverty, Curator of Architecture at the Athenaeum of Philadelphia. Bruce has the enviable job of keeping a large portion of the architectural record of Philadelphia. Here in the collections is the whole hidden-in-plain-sight process of the changing city: design evolution, construction, alteration, demolition, and preservation. This is the first part of the interview, read part 2 in Vantage, tomorrow.

LD:Constructed in 1845, the Athenaeum has stood testament to many of the historical, social and economic changes in the city. How has the city’s preservation philosophy developed during its 160+ years?
BL: The city will not remain static and we can’t preserve everything. The arguments that we have over what does get preserved sort of reflect where we are at a particular time. I like to say that, certainly it’s true of architecture, in Philadelphia there really are no new arguments about architecture or urban planning, that there are just old arguments that are being argued by a new generation. So whether that’s about the design of Independence Mall, and the re-design of that in the 1990s by Bohlin Cywinski Jackson and Laurie Olin, and having Ed Bacon just about have his head explode that the symmetry of the Beaux Arts designed mall would be destroyed reflects back to the murmuring that happened when acres and acres and acres of 19th century property were demolished in order to create that green symmetrical blanket in front of the State House. A lot of people say “how could they have torn down all those historic buildings at that time?” Of course, in the 1950s, there was no National Register, and when they started demolishing those, there was no Philadelphia Historical Commission, so there was really no governmental structure in place to prevent that, and in many ways it was the government [both the state and federal] that was behind it. But even more than that was the attitude of both experts as well as laymen that 19th century buildings were not yet “historic.” They were only “old.”  And at that time, old buildings were bad, historic buildings were good. 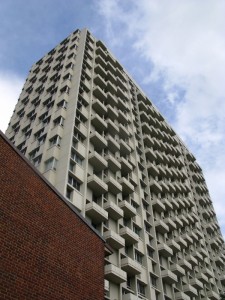 LD: Why do you think that is?
BL: It’s in that 50 to 75 year period that buildings are most threatened. It’s very easy to say “those are worthless,” and this is one of the things the blogger at PhilaPhilia comments about. That person is looking at buildings that were built in the 1950s and 1960s and not seeing anything worthy about them. They may not feel the same way in another 25 years, or their children may not feel the same way.

LD: How has the Athenaeum managed to survive in its original building in Washington Square?
BL: In the late 19th century, a lot of the older Philadelphia institutions moved west towards Broad Street, like the Library Company of Philadelphia and the Historical Society, or later out to the Parkway…there was never any talk of that here. There was a very good chance that we might have been completely demolished if they had located the Benjamin Franklin bridge to empty out on Washington Square rather than Franklin Square, which was mentioned in one of the proposals. I don’t think we would’ve survived that…One of the reasons that I think the building is in such good shape in terms of its historical nature was the poverty of the Athenaeum. 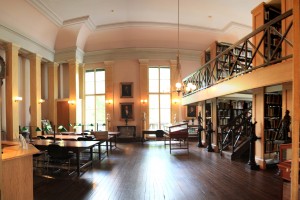 We did not have a lot of money to throw around in order to modernize the structure. There was no electricity in this building until 1923. We had a privy in the backyard until 1962. We did have one other indoor toilet before that, but the fact that there still was a privy building in 1962, and it would still be there today, except that there was a hurricane and a tree fell on it, demolishing it.  When Roger Moss came in the late 1960s. he took several years to try and figure out what the Athenaeum should stand for, and he oversaw the first real restoration of this building in 1975-76. In 1975, the original coal-fire furnace, which had worked for 135 years was removed. How the building didn’t burn down is just amazing. They never bought new furniture, so they just kept repairing the old furniture. The chairs that we’re sitting on, the tables in the Reading Room are the same tables. It was poverty that was the friend of preservation for all those years. When you have lots of money to spend, it’s easy to lose some of that stuff. A lot of people think that when they look at the building today that we always venerated the building. The truth is until the 1970’s that we ignored the building, and the building was built well enough that it was able to survive.

The Athenaeum is currently exhibiting Philadelphia Places on Paper: Selections From the Eli P. Zebooker Collection from September 19 to November 11, 2011.