A Building Is Never Completely Lost 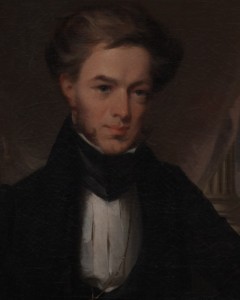 Thomas U. Walter, image courtesy of the Athenaeum

LD: Have you found any hidden secrets in the archives at the Athenaeum?
BL: Fortunately, the collection here is cataloged well enough that there aren’t too many surprises when we just open the drawers, although there can be surprises that come about. We currently have a volunteer who’s going through the Thomas Ustick Walter (TUW) letter books, who is creating a calendar of the letters TUW had written back and forth when he was at work in Washington DC. Our volunteer came to me, maybe during his second week, and said “Did you know that Walter was a slave holder?” He was a Philadelphia architect, but he was working in Washington…I said “No.” Sure enough, there was a letter from Washington DC to Walter’s father saying “I’m sending Frank to you for a couple of weeks, I hope that he can be of help to you. I bought him last year.” Then he goes on to say that he is an excellent worker, and within a year he will have bought his freedom. That was something that we weren’t aware of, and it gives you a different picture of things. The other great thing about my job, and the job of any archivist or manuscript librarian is that you get to read other people’s diaries and their mail. Even newspaper accounts are filtered, whereas when you read someone’s private mail and diary accounts, you get their feelings, their frustrations, their aspirations, the things that make them proud. Someone recently asked me, “Do you think [TUW] had a sense of humor?” I can’t really say I have ever seen anything funny that he ever wrote. In 1841, Walter went bankrupt for the first-time when he was working on Girard College. He had a lot of money invested in the Bank of the United States, and when the bank closed, he went bankrupt and had to sell his architectural library, then his furniture and then the house. He moved his seven kids and wife into a rented house. But about three weeks after that he put a little note in his diary “Sent my family on a church picnic party- Paid $3.” Underneath that he wrote, “Don’t much like paying for other people’s fun, especially when wealth has taken wings.” I mean, it kind of comes at a low point in his life, but it was his wife and kids who were having fun! That said, I don’t really find jocular letters. So, that’s fun to get to know someone through their writing. 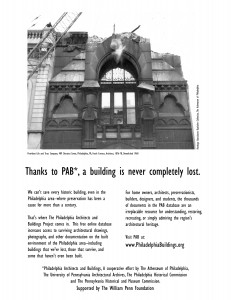 Courtesy of the Athenaeum

LD: How do you feel the Athenaeum supports the understanding/appreciation of Philadelphia’s historic buildings for the general public?
BL: About almost twenty years ago now we had a photograph that was given to us by Penny Batcheler, who was with the National Park Service. There was a series of photographs that she took of the demolition of Frank Furness’ Provident National Bank at 4th and Chestnut (where the Omni Hotel is now). It was a seminal building of his, built in 1876 in the same year as the Pennsylvania Academy of Fine Arts. Mike Lewis called the bank a “Self portrait of Frank Furness,” with the buck teeth and the sharp jaw. There’s a wonderful image that shows the wrecking ball going into that central, pointed, Gothic arch, demolishing the top part of the building. It’s the moment of impact. Roger [Moss] had a flyer made up with that image front and center with the by-line: Thanks to the Athenaeum, a building is never completely lost. It goes on to explain that for, what is now 196 years, the Athenaeum has made an effort to preserve books, as well as maps and drawings and photographs that document the built environment. We serve to support the preservation community to help save the buildings that are still here, but then even the ones that can’t be saved, we still have documentation of them so that there is still a reflection of what has been lost. So, if we want to re-build, or if we want to use those photographs or drawings to inspire the next generation to build more carefully or tear down even more carefully, then we can do that.