Inside the Shimmering Nave 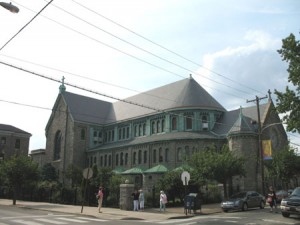 “You never really leave St. Gabriel’s,” says sexton Kathy Diering of the traditionally Irish Roman Catholic Church that heroically guards the intersection of 29th and Dickinson Street in Grays Ferry. This sort of bond is what enabled this congregation in limbo at the center of a neighborhood in free fall to raise the funds for a massive interior renovation in 1995.

Now, its interior restored, can St. Gabriel’s look ahead? And what does the church’s future mean for the neighborhood?

Designed by noted church and theater architect Edwin F. Durang in 1902, the exterior of St. Gabriel’s is craggy, rough-hewn granite, erected by the Irish men of the neighborhood. A ring of clerestory windows and a hipped green copper roof crowns the nave. But if the exterior is hulking and sober, post-restoration, the interior is lofty, and shimmering. “I was stunned at how magnificent it looked,” says artist Tom Curley, who grew up attending St. Gabriel’s. Gone was the fear and dread of his youth. In their place: “brilliant, golden and cream hues.” 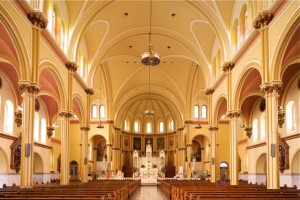 The floors and altar are made of polished white marble. The vaults and walls are yellow with white accents. The seven Stations of the Cross, carved in heavy relief and painted in vivid colors, line the walls of the nave. Biblical murals accent ceiling, including one of God the Father, whose eyes appear to follow you wherever you go.

Likewise, St. Gabriel’s has kept an eye on her children. At Christmas, they come a thousand strong from Delaware County, South Jersey, and beyond. It was at St. Gabriel’s that they were baptized, married, and educated. No matter where they live, the church remains their spiritual home. And, by and large, they paid for the renovation.

“Everyone wishes they could come back to St. Gabriel’s,” says Donna Connor, who grew up in Grays Ferry but now lives in Florida. “Life revolved what was going on around the parish.”

Indeed, many white residents who can afford to have moved elsewhere. Row houses are abandoned, lots filled with trash, and cats and dogs roam the streets. Racial violence, collapsing real estate values, and the loss of industry have taken a brutal toll on Grays Ferry. A heroin scourge ripped through the community in the 1970s, and scores of addicts died of overdoses in fetid back alleys. Irish-Catholic whites brutally clashed with African-Americans living in the recently demolished Tasker Homes. Angry words led to hurled bricks, beatings, and even bullets. In 1997, a group of whites leaving the St. Gabriel’s Parish Hall attacked two black teenagers, and the resulting street fight made national headlines.

In the fall-out, two nearby Catholic parishes have closed their doors and merged with St. Gabriel’s: King of Peace (historically Italian) and St. Aloysius (historically German). Their banners now hang in St. Gabriel’s nave, a symbol of unity for congregations once rigidly segregated by ethnicity.

But can this sense of unity extend beyond church walls? Likewise, can St. Gabriel’s reinsert itself into the life of the neighborhood? These are questions I pose in part 2 of this article, appearing in Vantage tomorrow.