Hero Of The Waterfront 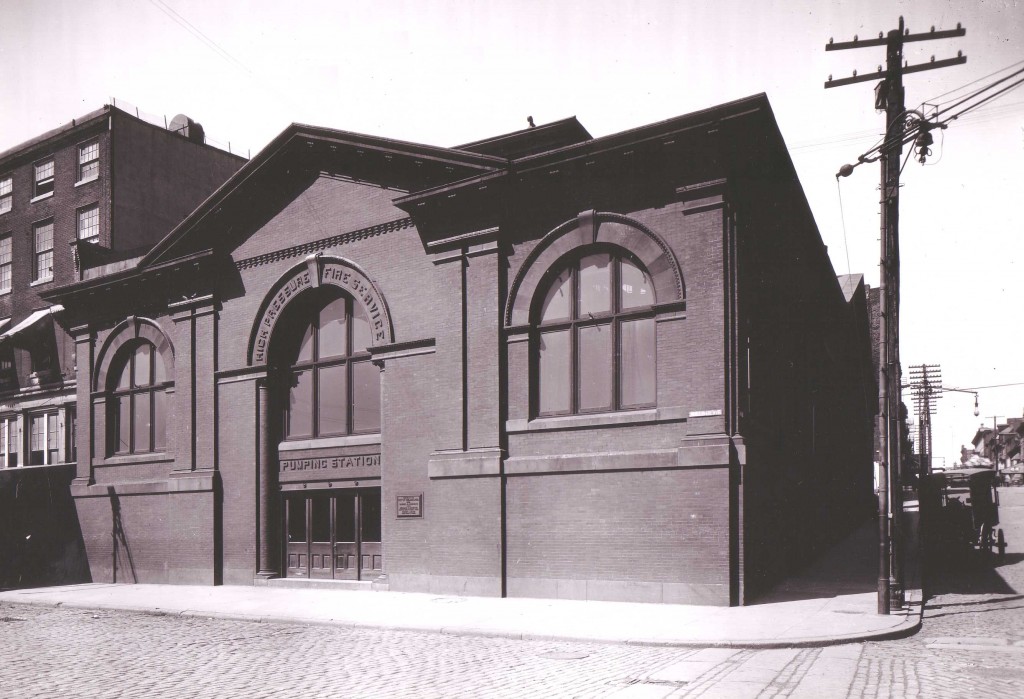 What exactly is that dilapidated red-brick building on Delaware Avenue across from the Race Street Pier? Often referred in the press as “the old water department pumping plant,” the High Pressure Fire Service (HPFS) building is one of the most important, yet unappreciated, buildings in Philadelphia.

The HPFS is to become office and performance space for the Philadelphia Live Arts Festival (Philly Fringe). A café is also part of the scheme, all part of the Race Street Pier development.

This modest Victorian building served the city for one hundred years, providing high-pressure water, at a moment’s notice, for use in fighting fires. Along with the high-pressure pipeline system that distributed the water, this small structure is the chief reason why Center City Philadelphia never suffered a catastrophic fire during the 20th Century.

The old pumping plant sits where a salt house was situated for roughly two hundred years. This was a place to store and sell salt and salt fish. Built in 1705 with bricks and timbers imported from England, it was one of the first structures erected on this stretch of the Delaware. Other enterprises used the storehouse before it was taken down about 1903 for the HPFS building.

Race Street was right next to the HPFS building before the street was moved a bit north due to the construction of I-95. A fragment of Water Street still remains behind the building. Philadelphia City Archives.

By the end of the 1800s, Philadelphia’s regular-pressure water had become ineffective in fighting fires in increasingly larger and higher buildings in the central business district. Years of prodding by insurance companies and the Philadelphia Fire Department spurred the city to install the world’s first high-pressure water service in a major city. Inaugurated in 1901 and completed in 1903, the system delivered water via independent pipes and special red fire hydrants located on every block between the Delaware River and Broad Street, from Race to Walnut, and beyond.

The HPFS building drew water right from the river via a twenty-inch main and supplied a network of twelve and sixteen-inch mains. Seven 280-horsepower pumps were powered by engines operating on city gas—an early use of internal combustion engines for such work. Full pressure was available within two minutes from the time a fire alarm was sounded.

The system had the capacity of pushing ten thousand gallons of water a minute at up to three hundred pounds of pressure, with power to throw a two-inch stream 230 feet vertically. Fireboats on the Delaware were also used for backup. They connected to the system via a manifold that still protrudes from the sidewalk in front of Race Street Pier.

This is a typical special high-pressure fire hydrant. Weighing 1000 pounds each, these red cast-iron hydrants were placed on every block between the Delaware River and Broad Street, from Race to Walnut, and also beyond. They are usually accompanied by one or two manhole covers marked “HPFS.”

Fire losses immediately dropped after the HPFS system was operational, prompting the removal of extra insurance charges imposed on structures within the congested downtown. Other pumping stations followed around the city when the system was expanded into surrounding neighborhoods. The system’s success brought about similar high-pressure water systems in other American cities. Philadelphia’s was acknowledged as the best in the world for years and years.

The fifty-six-mile system lasted until about 2005, when it was decommissioned after falling into disrepair. High-pressure water service had become unnecessary anyway due to better firefighting equipment, high-rise sprinklers and fire-resistant construction materials.

The HPFS building, though, still stands, undoubtedly the hero of the waterfront.