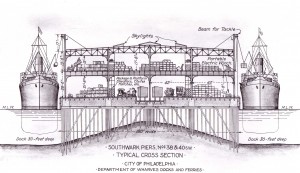 Two huge warehouse piers, 38 and 40 South, jut 551 feet into the Delaware River at the bottom of Christian Street. Jointly known as the “Southwark Group,” the brightly painted piers date from 1915 and are each 357,000 square feet in size. They were once the city’s busiest docks. For instance, international shipper Norton, Lilly & Company operated an around-the-world cargo service from Pier 40 in the 1920s. Vessels would travel twenty-seven thousand miles between visits to homeport Philadelphia.

In the 1950s, the space between Piers 38 and 40 was filled in and paved to accommodate tractor-trailers. The buildings are used for warehousing these days, including a self-storage business. Few boats ever tie up to the Southwark Group Piers anymore. 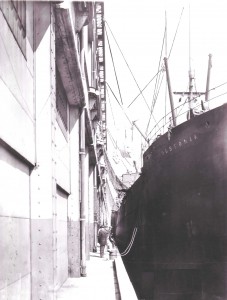 How ships docked at the Southwark Group. Philadelphia City Archives