For Ken Powell, who grew up in Grays Ferry in the 1950s and is a municipal court judge living in Chestnut Hill, the idea of letting St. Gabriel’s Church fall into ruin is absolutely unthinkable. “There’s an old tale that saint’s bodies don’t decay, but they marbleize,” he says. “That’s sort of the way the church is for me. It’s timeless.” 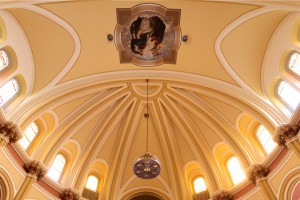 For 29-year-old Meagan McGowan Rubino, who grew up in Grays Ferry but now lives in Drexel Hill, there was no question of where she would get married. Her family had attended St. Gabriel’s for generations, and her parents had met at the parochial school. Soon after meeting with the priest to discuss her marriage, she sat down in one of the pews, and a ray of light from one the stained glass windows struck her late grandmother’s engagement ring, spraying the colors of the rainbow across the nave walls.

Powell says that Grays Ferry in the 1970s was dangerous, and he learned early how to survive. The brick rowhouses were utilitarian, the narrow streets treeless. “It was not easy living with 110 kids on your block and 70 in your grammar school class.” For children like him, the church was a safe haven from the neighborhood. “Because you were forbidden to talk in church,” he says, “you were forced to be contemplative.”

These days, some 6,200 people call Grays Ferry home, down from 6,600 in 2000. White population fell 41% in that period; African American, Latino, and Asians increased by 17%. Few of them have ever been inside St. Gabriel’s. Not surprisingly, at a recent Saturday mass celebrating the Holy Trinity, I found the church’s congregation a shadow of its former self. Able to seat a thousand, over 750 seats were empty. The congregation is mostly Irish-American and over fifty, and on that particular Saturday afternoon, entirely white. The New Testament reading during the Feast of the Holy Trinity was a fitting prayer for long-suffering Grays Ferry: “Finally, brothers and sisters, rejoice! Strive for full restoration.”

But how? People like Powell and Rubino aren’t moving back.

I am told that African-Americans, Filipinos, and Koreans, glad for this message, have begun to attend mass at St. Gabriel’s. Like the Irish before them, they are poor. Household income in Grays Ferry dropped 29% in the last decade. 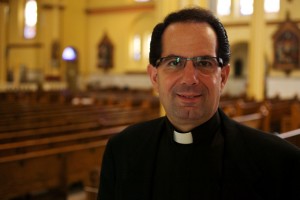 “People seem to be coming back to the church, which is wonderful,” says Father John Zangarella, the pastor at St. Gabriel’s for the last year. “We’ve had four to five baptisms a month. That’s a sign of growing and healthy congregation.”

But how to reconcile what I observed with the Father’s assertion? And, if the church is indeed seeing an influx of these newcomers, how will the long-time Irish-American parishioners respond?

The church is affiliated with the Norbertine order, which adheres to St. Norbert’s mission as minister of peace and concord. “We dedicate ourselves to reconciliation,” says Father Zangarella, the head priest of St. Gabriel’s for the past year.

That, at least, is a promising start.