“We used to play here when I was a child.” It is a familiar refrain among long-time Kingsessing residents when they talk about Mt. Moriah Cemetery’s decline into an overgrown dumping ground.

Indeed, obscured by tall grasses, vines and thicket, the landscape earlier this summer was sublime and desolate. But there it was, beneath the surface, a cross section of Philadelphia’s history: thousands of life stories and their memorials, hidden under wild vegetation and man-made debris.

The expected emotional ties to cemeteries, associated with the memory of loved ones, are only part of Kingsessing’s attachment to this large neighborhood landmark. Mount Moriah was designed as a rural cemetery, in the style of the 19th century, both a memorial and leisure park. The paths are shortcuts and walking trails, the rural landscape integral to community life. Residents recall Memorial Day ceremonies and Fourth of July celebrations at the revered Civil War and Navy burial sections.

As the cemetery’s owner, Horatio Jones, began to neglect the site in the late 1990s, the cemetery went from neighborhood asset to eyesore, contributing to the overall disinvestment in Kingsessing.

Jones died in 2004, and his wife and assumed heir, Linda Jones, inadequately managed the business.  Since she left the site in early April, lot owners have been arriving with lawn mowers in the trunks of their cars Sunday afternoons. Carving paths through the roughage to graves is one way friends and relatives could reclaim dignity for their loved ones. In the absence of a formal caretaker, community groups have come together to organize a stewardship effort as the City of Philadelphia pursues a suitable receiver for the cemetery. 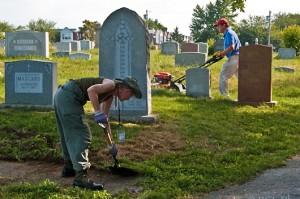 Last month, in an extraordinary show of assistance, the city carried out a large scale effort to mow and trim, exposing active lots for years overgrown. One neighbor noticed immediately on the first day. “I left for work and the grass on the outside of the fence was getting long again since our last clean up.” When she returned to her house, which faces the cemetery’s entrance, the grass had been mowed and City workers were still at it, using the extra light of the summer evening.

The Mayor’s Office of Neighborhood Services team revealed hundreds of grave markers in active burial sections with a careful mowing of tall grass and pruning of memorial plantings. Garbage, construction debris and burnt out cars were removed from the site. Usually charged with the under-appreciated task of clearing vacant lots, the Neighborhood Services team became especially invested in the cemetery cleanup, extending their efforts to clear the drives in the oldest sections of the site. Though much of this area has been overgrown with native trees, free access to this area increases the future possibilities for discovery and preservation of Mount Moriah’s early history.

Additional community cleanups will be held on September 10th and October 8th.  Sign up to volunteer at SERVE Philadelphia.

Part 2 appears tomorrow in News: Why Mt. Moriah matters (and why you should volunteer).

Libbie Hawes Libbie Hawes worked for a decade as a theatrical properties master, and went on to attend University of Pennsylvania’s Graduate Program in Historic Preservation, earning her master’s degree in 2010. She has a particular affinity for traditional building technology and vernacular architecture. Libbie is the Buildings and Grounds Coordinator at Cliveden of the National Trust and a Program Assistant at the National Trust for Historic Preservation’s Northeast Field Office.