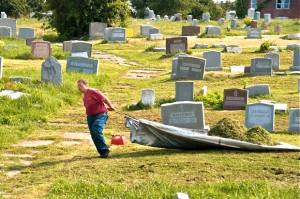 When one neighbor moved across the street from the Mount Moriah Cemetery gate 25 years ago, the location was a selling point, and the cemetery an oasis in the dense neighborhood.

Rowhouses were occupied by their owners. Residents would come home from work and sit on their porches after dinner, watching the sun set behind the cemetery. Weekends and evenings found neighbors walking dogs and children riding bikes along the cemetery’s curving drives. Families paid their respects to buried loved ones on Sundays. The peaceful landscape was an oasis in the dense neighborhood.

In those days, the upkeep of the cemetery grounds set the tone for responsible home maintenance on the block. But as the older, less active burial sections were soon disregarded, it didn’t take long for the landscape to get out of control. The worst neglect began about five years ago when the cemetery owners stopped repairing the gate and limited mowing to burial sections adjacent to the office.

As the care of the cemetery declined, the neighborhood followed: families left and rowhouses passed to absentee landlords who failed to maintain them. In the past year no less than eight houses have been abandoned in the Kingsessing Avenue row facing the cemetery.

The Mount Moriah Cemetery Association was founded in 1855 by an organization of cemetery managers, led by father and son, George and Horatio P. Connell, as a speculative business venture. Preceding the commercial and residential development of southwest Philadelphia, Mount Moriah joined Laurel Hill Cemetery (1836) and Woodlands Cemetery (1840) on the roster of rural cemeteries that represented Philadelphia citizen’s changing attitudes toward death.

Eventually growing to some 380 acres in Kingsessing and Yeadon, Delaware County, the cemetery’s rolling hills are bisected by Cobbs Creek. The dramatic topography was an ideal setting for a picturesque rural cemetery in 1855.  Accessed by streetcar, rural cemeteries provided rapidly developing urban centers with safe burial grounds when concerns about overpopulation, pollution, disease and soaring costs of real estate forced cemeteries to the outside edges of cities. Mount Moriah distinguished itself by catering to the emerging middle class population, offering affordable burial services for those upwardly mobile families who prospered as the city industrialized.

What’s the future of Mount Moriah? The Friends imagine a cemetery that contributes to revitalizing the neighborhood above ground while commemorating the history that lies buried. A cemetery is for the use of the living, after all.

Additional community cleanups will be held on September 10th and October 8th. Sign up to volunteer at SERVE Philadelphia.

Libbie Hawes Libbie Hawes worked for a decade as a theatrical properties master, and went on to attend University of Pennsylvania’s Graduate Program in Historic Preservation, earning her master’s degree in 2010. She has a particular affinity for traditional building technology and vernacular architecture. Libbie is the Buildings and Grounds Coordinator at Cliveden of the National Trust and a Program Assistant at the National Trust for Historic Preservation’s Northeast Field Office.