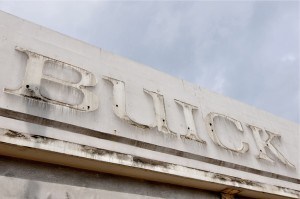 In 2007 Philadelphia Magazine and others heralded the rebirth of desolate North Broad Street with investment and fresh ideas from pioneers like restaurateur Marc Vetri and developer Eric Blumenfeld. It seemed as if the unforgiving stretch of pavement between City Hall and Temple University was destined to become the next hotspot. Vetri’s now renowned Italian restaurant, Osteria, and Blumenfeld’s Lofts at 640 began to set the tone for what the grand avenue would become. But then things seemed to fall flat. Four years later, it’s less charcuterie and thin crust pizza and more drive-through burger joints, less urban living and more vacant lots.

That’s beginning to change. With two new restaurants in the works, Vetri and Blumenfeld, this time partnered with Stephen Starr, are making another big push forward at 600 North Broad Street. And, in an unusual effort outside of Northern Liberties, Bart Blatstein’s Tower Investments is embarking on a large residential and retail development at Broad and Spring Garden Street, as reported last month by NakedPhilly. All of this news follows ongoing speculation that a High Line-inspired revival of the abandoned Reading Viaduct, accessed just east of Broad at Noble Street, could bring transformative investment to the area. 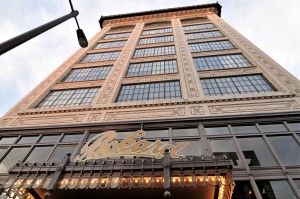 With all of this much-needed attention, it’s worth taking a look at a bit of North Broad Street’s history and the historic buildings that could, with a little TLC, contribute a lot to the continued revival of this important corridor.

North Broad Street’s many spectacular landmarks – the Divine Lorraine Hotel, Rodeph Shalom Synagogue, the Metropolitan Opera House – need little introduction. But to many, the area above City Hall remains the inhospitable territory of hulking giants like Hahnemann Hospital or Temple University. With its wide, nearly endless stretch of pavement, it seems the only people that feel at home on North Broad are drivers safely ensconced in their cars. But there are plenty of less prominent and no less beautiful buildings that belie the avenue’s auto-centric nature, and strangely enough were built precisely because of the car. 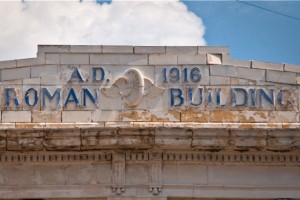 Beginning around the turn of the 20th century, the burgeoning automobile industry set up shop on North Broad Street in manufacturing plants and showrooms stretching as far north as Girard Avenue, forming what eventually became known as Automobile Row. By 1920, North Broad was home to over fifty auto related businesses. Brands familiar still today – Cadillac, Buick, Oldsmobile – mixed with now forgotten auto pioneers such as Gomery-Schwartz and Chalmers. Everything from the design and production to the sale of cars happened here, with dozens of tire, parts, and accessories stores opening to outfit new drivers entranced by the new thrill of automotive transport.

Although many of the elaborate auto showrooms – many with finely finished wood and gilded surfaces – have since disappeared, there are still dozens of surviving auto-related buildings on North Broad apart from the Packard factory. Look closely at a building here and you just might find evidence that it once catered to cars. The Roman Automobile Company, one of the largest used car dealerships in the city in the 1910s, built a showroom just south of the Divine Lorraine in 1916, its flying spoked wheel still appearing in relief on the pediment. And, at 802 North Broad, “MICHELIN TIRES” can still be found inscribed below the cornice, proudly announcing the tire company’s home, opened in 1921. The Michelin showroom’s Classically-inspired façade is typical of the style preferred by automobile companies at the time. If you see a building like this on North Broad Street, especially if it has bright white terra cotta and big plate glass windows, it likely was once home to a model like the 1920 Chevrolet Series 490. 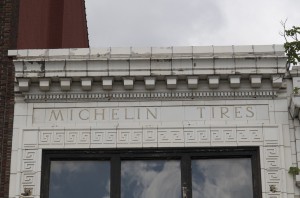 The cars are now gone, but building like the former Michelin showroom still has hope. With its big windows and open floor plate, it could provide prime space for a range of smaller developments, mixing in with the larger Vetri, Starr, and Blatstein projects. Because of their scale, such buildings have the potential to bring a much more pedestrian-friendly experience to North Broad, something that it needs if developers want people to keep coming back.