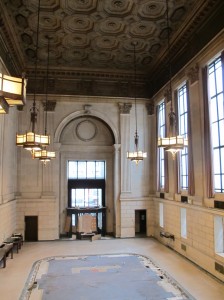 The energy that developer Tony Goldman catalyzed on 13th Street in Center City finally seems to be pushing eastward. Significant new development, already underway, will mean new life for an area that was once the commercial heart of Philadelphia.

If all goes as planned, the abandoned Beneficial Savings Fund Bank at 12th and Chestnut will become 1200 Bank, an upscale billiards hall and bar, sometime mid-2012. The imposing Classical Revival bank was designed by Horace Trumbauer and constructed in 1915. Its voluminous interior spaces–with coffered ceiling and Corinthian pilasters–will serve as an elaborate backdrop for pleasure. Although neighbors’ concerns about noise from a proposed rooftop bar threatened to derail the project, legislationpassed by City Council in April created the zoning changes necessary for the development to move forward. Developer Paul Giegerich’s reuse concept demonstrates how Chestnut Street’s many outstanding but vacant buildings can be creatively reused. The landmark pool palace is an updated version of 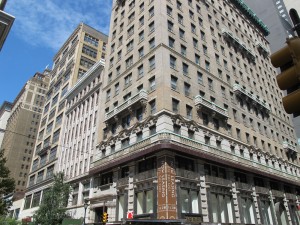 the billiards renewal of the 1990s; it joins the Lucky Strike bowling alley, a block up the street, to form a new kind of entertainment space in Center City, expanding the nighttime nucleus beyond 13th and Sansom.

Just across the street, the finished conversion of the former Commonwealth Title & Trust Company at 1201 Chestnut Street to the Commonwealth Apartments adds several hundred new residents very center of what Goldman once called “the hole in the doughnut.” The adaptive reuse of the seductive 15-story building, constructed in 1902, will lead to new retail and service businesses like the just opened Milkboy Coffee, at 11th and Chestnut, in the former TS Health Mart. Milkboy, an expansion of the well-known Ardmore coffee shop, is the type of business that Chestnut Street hasn’t recently been able to support. 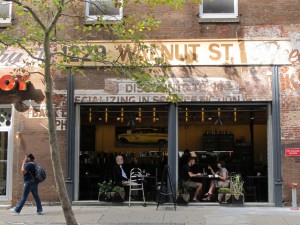 Goldman gets enormous credit for this transformation. Our sense is that the spillover to Chestnut Street is only now about to take off. More is coming–and we’ll be there to follow it.