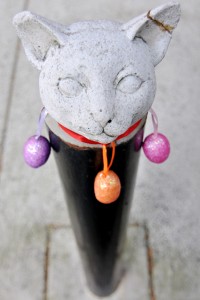 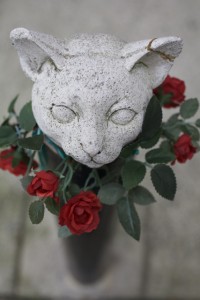 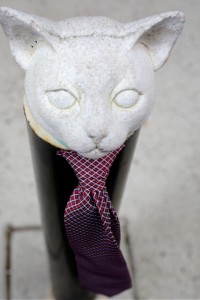 On tiny Van Pelt Street just before it dead ends at Spruce are several short metal bollards–the kind meant to keep cars off the sidewalk. Posts like these are usually no prize to look at, but occasionally someone does something creative with them, like the one on Poplar Street, west of 2nd, painted to look like a cigarette.

Here, the bollards on the west side of the street are capped by horse heads, a not uncommon touch in the tonier neighborhoods. The two posts opposite are topped by cats heads that are about the size of baseballs.

They were placed there by a neighbor–guerilla decoration if you will. And she accessorizes them, too. A few months ago, they were wearing necklaces made from ribbon and sparkly plastic balls. Right now, one is sporting a tie, the other a wreath of plastic roses. It’s a fine, whimsical gesture in a rather staid part of town.