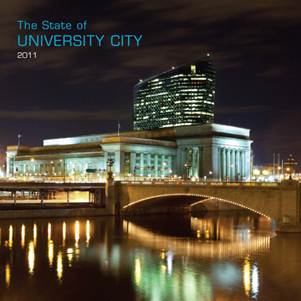 Initially conceived in 1997 as a means of warding off an uneasy spike in crime, the University City District has grown into a civic juggernaut with a robust budget approaching $8.2 million for this year. Yesterday, UCD issued its annual report, “The State of University City 2011,” at World Café Live, touting the district’s remarkable revitalization in the past decade and a half, as well as stressing that eastern West Philadelphia is an economic powerhouse, indelibly tied to the future of the city.

Bergheiser offered an extensive review of current projects underway across the district, including the public space to the south of 30th Street Station, vast student housing complexes at 41st & Walnut and 32nd & Chestnut, and the new Krishna P. Singh Center for Nanotechnology at 3200 Walnut. 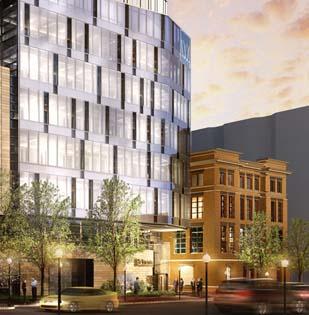 The Wistar Institute will construct a new 89,700 sq. ft research facility by 2014/ Photo: Courtesy of PBJ

Included among that litany is the Wistar Institute’s new laboratory research facility at 3601 Spruce Street, designed by Ballinger, and expected to be completed by 2014. Wistar’s Italian-born director Altieri was described by Bergheiser as the epitome of the district—an ambitious émigré, coming into his own through academia, followed by “giving back.” Altieri in turn drew an interesting parallel in his comparison of cancer research to the nature of University City’s revitalization. Spurred by an incredible urgency, both undertakings are only possible by the “spirit of cooperation, inclusion, and integration” found here in Philadelphia.

Drexel’s President Fry discussed his university’s current efforts of expansion, which he applied to the city as a whole. He joked that “in true Philly fashion, we have not pressed” the advantage that our location has afforded us; that will all change when high-speed rail transforms the area into the “50 yard line” of the East Coast. In addition, Fry deemed the district’s progress contingent upon how well it bounds its “intellectual ecosystem” to the diversity of its neighborhoods.

Bergheiser also showed a video meant to define University City as a place “full of pioneers making big plans.” One such pioneer is Abd Ghazzawi, manager of the new Manakeesh Cafe Bakery on the corner of 45th & Walnut. Opening his “New Lebanon” cost Ghazzawi more than it should have; coming across a grand, yet decaying bank building at that corner, the restaurateur bought the property, endeavoring to both preserve and enhance his neighborhood.

“It is a great joy to be a part of the revitalization of our corner specifically,” says Ghazzawi, and “I look forward to being an integral part of the continued growth of University City.”