Perhaps more than art or literature or even film, architecture is a barometer of the times. Post-Franco Spain exploded with ambitious, progressive-minded buildings; post-Reagan America fizzled into pastiche, cheap materials, and poor memory. Have a look at the immense, 824 page Phaidon Atlas of Contemporary World Architecture, published in 2004. There are about as many entries for Girona, a Catalan university town, as there are for New York. There are none for Philadelphia. Herbert Muschamp, the late Philadelphia-born New York Times architecture critic, spent gallons of ink complaining about the moribund state of New York architecture. 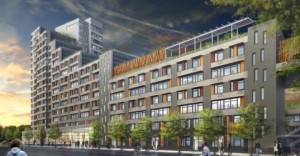 After the Phaidon book came out, with the High Line framing the action, New York architecture rediscovered its grit. Monday, the current Times architectural critic, Michael Kimmelman, explored the ideas behind the ambitious “Via Verde” affordable housing complex in the Bronx, designed by Grishaw Architects, of London, and Dattner Architects, of New York. The 20 story, 222-unit building–with heaps of green and “healthy” amenities for a resident population with scarce resources–reminds me of the optimistic, sun-glimmering countenance of early modernism.

The same values and ideas that inform Via Verde were employed in Interface Studio Architects’ excellent 13-unit Sheridan Street Houses, reviewed here on Monday by Kevin McMahon. Both projects were the result of intentional efforts to redefine public housing with new architectural forms and green building practices. The Sheridan Street project garnered ISA four awards for architectural merit and sustainability. 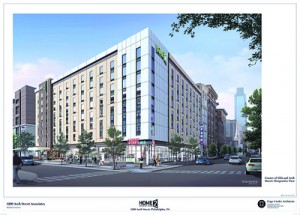 The difference, of course, is scale. But thinking small, as we have been forced to do in Philadelphia, is no excuse for not thinking at all. In a sense it means each individual project matters all that much more. Thus, it’s particularly painful to see yesterday’s announced Hilton Home2 Suites, a convention center hotel with less architectural vision than a dunghill–this across the street from the Reading Terminal–on top of Jefferson University’s rear-guard tower a few blocks away. “You can’t imagine a worse building,” says University of Pennsylvania historian and former vice-chair of the city’s Historical Commission Tom Sugrue, about the Jefferson tower. I might say the same of the Mormon temple, on Logan Square, with its pandering, circa 1911 design. Each one of these projects is a lost opportunity to prove that we mean to take ourselves seriously as a city in 2011. 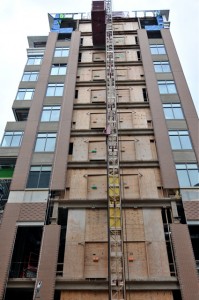 This is not, of course, a condemnation of Philadelphia architects (or recent gems, like Tod Williams Billie Tsien’s Skirkanich Hall). “The issue,” says Sugrue, “is that we have so many unimaginative developers.” It’s worth reminding ourselves that with Frank Furness Philadelphia merged architecture form and engineering precision, elegance and muscle, brilliant color and mud and steel; that Lou Kahn and Oscar Stonorov pushed American public housing into the modern era with the brilliant Carl Mackley Apartments (named for a striking textile worker gunned down by a scab), at M and Bristol Streets in Juniata Park.

In those days, Kahn and Stonorov and others in the vanguard were keen to prove their own and the city’s mettle. Never mind the Depression, Howe and Lescaze’s PSFS building had just opened. The proof was in the steel and glass. 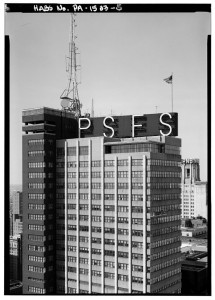 In Chicago in the 1992 or so, researching the relationship between the University of Chicago and the Hyde Park neighborhood, I was taken to a massive vacant lot near the lakefront. On the lot was a series of model houses, each designed by a different architect. The point had been to reinvent Chicago residential architecture by allowing designers to experiment–and by doing so to capture the public’s imagination for new urban forms.

It seems to me this is precisely what we’ve neglected to do. At just about every chance, bludgeoned with the notion that we were a great city, we were a great nation, we continuously, and blindly defer to precedent (or to the market). Conventioneers want a certain “product,” we tell ourselves, eliminating our own power as a city to delight, inform, and inspire. This is why even a small project like Sheridan Street Housing is so important. It forces us to think forward, and it doesn’t waste our time.