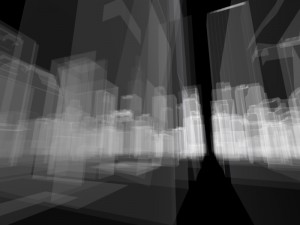 This summer, at Dia: Beacon, the palisade of late Modern art born from the ruins of a Nabisco packaging plant along the Hudson River, I came across a pair of thick books put out by the Urban Age Projecton the “endless city.” The idea for the Project and the books was to pull together some of the world’s most incisive urban observers to deconstruct the mind-boggling global migration that has turned most human beings into city dwellers. And indeed, with places like Mumbai, Kinshasa, Dhaka, Delhi, and Lagos increasing in size by 40 or 50 people an hour, by 2050 75% of people will inhabit cities.

Does this leave us with the “infernal world” imagined in Invisible Cities by Italo Calvino, in which “each city takes to resembling all cities, places exchange their form, order, distances, a shapeless dust cloud invades the continents?” This is one of the questions the Urban Age folks explore without dispassion but with a seemingly endless data set, on everything from carbon emissions to slum conditions. They pull apart and point up nine cities, including Istanbul, Mumbai, Mexico City, and New York. At heart of the endeavor is to help posit the ways in which cities can serve humankind, and in so doing, not become lost particles in a shapeless dust cloud, but particular nodes of human ambition, innovation, and endeavor.

This impulse, I believe, is what was behind John Gallery’s thinking in my piece in today’s Inquirer. Faced with a choice between emphasizing the historic character of the street or contemporary forms and spaces, he says, “it’s the question of what it is you think will make Philadelphia a distinctive city in the future.”

I hope we all can agree there’s no straightforward answer. In this regard, I think often about Istanbul, which for quite opposite reasons than Philadelphia, is forced to think about this question. In 1970, Philadelphia and Istanbul were the same size, about 2 million people. Since then, of course, Philadelphia shrunk considerably and Istanbul exploded, to about 13 million. Most Istanbullus live in placeless and formless (and endless) high density rings, far from the distinctive center. Like Philadelphia, Istanbul has done a poor (some say criminal) job preserving its considerable architectural heritage.

Now, then: how to make the Istanbul of the future distinct? The recent answer–possible when your city produces a quarter of the national GDP–has been to think big. A new canal to divert commercial shipping from the Bosphorous to free it up for pleasure craft; the adaptive reuse of the massive old electrical power station, Sentral, into a university-culture-innovation campus; Zaha Hadid’s plan for Kartal-Pendik, a new urban nucleus in an old warehouse district on the Asian side of the Bosphorous–these are signs that contemporary urban ideas and desires, and not just the inherited ones–the two in dialogue, in tension–can, as Calvino wished, help us see our way out of the inferno.

I’m not sure I like everything about the work of Hadid, one a handful of truly global starchitects, but I’m more than willing to listen. She will be here November 19 to receive the 2011 Collab Design Excellence Award at the Philadelphia Museum of Art. Oh, how I’d like to drag her down to the Navy Yard, the Conrail coal transfer yard, to the Frankford Arsenal…